The von Neumann-Fuchs bomb, and the radiation compression mechanism of Ulam-Teller-Sakharov 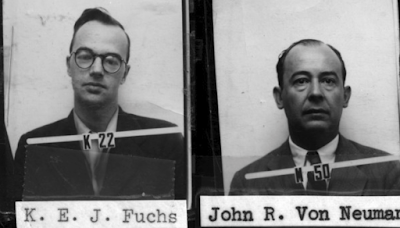 Some useful references below on the Ulam-Teller mechanism, Sakharov's Third Idea, and the von Neumann-Fuchs thermonuclear design of 1946. They resolve a mystery discussed previously on this blog:


Sakharov's Third Idea: ... If Zeldovich was already familiar with radiation pressure as the tool for compression, via the Fuchs report of 1948, then perhaps one cannot really credit Teller so much for adding this ingredient to Ulam's idea of a staged device using a fission bomb to compress the thermonuclear fuel. Fuchs and von Neumann had already proposed (and patented!) radiation implosion years before. More here.

It turns out that the compression mechanism used in the von Neumann-Fuchs design (vN is the first author on the patent application; the design was realized in the Operation Greenhouse George nuclear test of 1951) is not that of Ulam-Teller or Sakharov. In vN-F the D-T mixture reaches thermal equilibrium with ionized BeO gas, leading to a pressure increase of ~10x. This is not the "cold compression" via focused radiation pressure used in the U-T / Sakharov designs. That was, apparently,  conceived independently by Ulam-Teller and Sakharov.

It is only recently that the vN-F design has become public -- first obtained by the Soviets via espionage (Fuchs), and finally declassified and published by the Russians! It seems that Zeldovich had access to this information, but not Sakharov.


Jeremy Bernstein: When I was an undergraduate at Harvard he [vN] came to the university to give lectures on the computer and the brain. They were the best lectures I have ever heard on anything — like mental champagne. After one of them I found myself walking in Harvard Square and looked up to see von Neumann. Thinking, correctly as it happened, that it would be the only chance I would have to ask him a question, I asked, ‘‘Professor von Neumann, will the computer ever replace the human mathematician?’’ He studied me and then responded, ‘‘Sonny, don’t worry about it.’’

Note added from comments: I hope this clarifies things a bit.


The question of how the Soviets got to the U-T mechanism is especially mysterious. Sakharov himself (ostensibly the Soviet inventor) was puzzled until the end about what had really happened! He did not have access to the vN-F design that has been made public from the Russian side (~2000, after Sakharov's death in 1989; still classified in US). Zeldovich and only a few others had seen the Fuchs information, at a time when the main focus of the Russian program was not the H bomb. Sakharov could never be sure whether his suggestion for cold radiation compression sparked Zeldovich's interest because the latter *had seen the idea before* without fully comprehending it. Sakharov wondered about this until the end of his life (see below), but I think his surmise was not correct: we know now that vN-F did *not* come up with that idea in their 1946 design. I've been puzzled about this question myself for some time. IF the vN-F design had used radiation pressure for cold compression, why did Teller get so much credit for replacing neutrons with radiation pressure in Ulam's staged design (1951)? I stumbled across the (now public) vN-F design by accident just recently -- I was reading some biographical stuff about Zeldovich which touched upon these issues.

Consider the following words in Sakharov’s memoirs, with a note he added toward the end of life:

Now I think that the main idea of the H-bomb design developed by the Zeldovich group was based on intelligence information. However, I can’t prove this conjecture. It occurred to me quite recently, but at the time I just gave it no thought. (Note added July 1987. David Holloway writes in “Soviet Thermonuclear Development,” International Security 4:3 (1979/80), p. 193: “The Soviet Union had been informed by Klaus Fuchs of the studies of thermonuclear weapons at Los Alamos up to 1946. … His information would have been misleading rather than helpful, because the early ideas were later shown not to work.” Therefore my conjecture is confirmed!)


Teller, 1952, August (re Bethe’s Memorandum): The main principle of radiation implosion was developed in connection with the thermonuclear program and was stated at a con­ference on the thermonuclear bomb, in the spring of 1946. Dr. Bethe did not attend this conference, but Dr. Fuchs did. [ Original development by vN? ]

It is difficult to argue to what extent an invention is accidental: most difficult for someone who did not make the invention himself. It appears to me that the idea was a relatively slight modification of ideas generally known in 1946. Essentially only two elements had to be added: to implode a bigger volume, and, to achieve greater compression by keeping the imploded material cool as long as possible.

The last part ("cool as long as possible") refers to the fundamental difference between the vN-Fuchs design and the U-T mechanism of cold radiation compression. The former assumes thermal equilibrium between ionized gas and radiation, while latter deliberately avoids it as long as possible.

Official Soviet History: On the making of the Soviet hydrogen (thermonuclear) bomb, Yu B Khariton et al 1996 Phys.-Usp. 39 185. Some details on the origin of the compression idea, followed by the use of radiation pressure (Zeldovich and Sakharov).
Posted by Steve Hsu at 9:11 PM