This was posted by commenter "husposter" in the thread for COVID-19: CBA, CFR, Open Borders, and I thought I would promote it here. Along similar lines, I read somewhere today that economic indicators for Sweden (no lockdown) are quite similar to those for neighboring countries that are under lockdown. Rational people will tend to enact social distancing even if it is not forced on them.

From what I understand, CV-19 is a terrible infection to have even for many people who avoid going to hospital. There may be an ~80% chance of a mild or entirely asymptomatic case, but the tail of the probability distribution is very unpleasant... and in the worst case, it seems like a terrible way to die.


husposter: Why do people assume that the economy will "get back to normal" if the lockdown is ended without the disease being controlled?

The "lockdowns" came AFTER the private market started to shut down voluntarily. I was there. I saw it. My company was canceling travel and the NBA was cancelling its season while "the government" was still encouraging people to go out.

Who the heck is going to take a 1% chance of dying? A 10% chance of hospital stay and permanent lung damage? Who is going to expose friends, loved ones, and co-workers to that chance if they get infected?

To even propose that there is some kind of "choice" to save the economy at the price of a few old people dying (and its not like the victims are even as clear as you'd like it to be) is a dangerous false dichotomy. There is no way the economy is exiting the lockdown until the disease is under control.

The "lockdown" just gives the authorities the ability to go after egregious malcontents that are so socially degenerate they can't obey basic behavioral norms at a time like this. Your workplace would not be open right now even if the government allowed it.

Either get the disease under control, or there is no economy. You aren't a clever heartless individual, you're an idiot that wants to seem "tough".

This is what people would be risking so they could go to a concert:


It first struck me how different it was when I saw my first coronavirus patient go bad. I was like, Holy shit, this is not the flu. Watching this relatively young guy, gasping for air, pink frothy secretions coming out of his tube and out of his mouth. The ventilator should have been doing the work of breathing but he was still gasping for air, moving his mouth, moving his body, struggling.

We had to restrain him. With all the coronavirus patients, we’ve had to restrain them. They really hyperventilate, really struggle to breathe. When you’re in that mindstate of struggling to breathe and delirious with fever, you don’t know when someone is trying to help you, so you’ll try to rip the breathing tube out because you feel it is choking you, but you are drowning.

When someone has an infection, I’m used to seeing the normal colors you’d associate with it: greens and yellows. The coronavirus patients with ARDS have been having a lot of secretions that are actually pink because they’re filled with blood cells that are leaking into their airways. They are essentially drowning in their own blood and fluids because their lungs are so full. So we’re constantly having to suction out the secretions every time we go into their rooms. 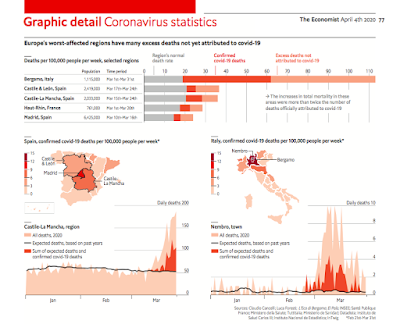 More Added: Ioannidis preprint estimates that a large fraction (e.g., ~30 percent) of US CV19 dead are under 65, in sharp contrast to Europe and Asia (~5 percent). This suggests (as pointed out many times by commenters here) that cocooning may be more difficult here than abroad. While this data is very noisy at the moment it is hard to believe that the entire difference is due to noise.
Posted by Steve Hsu at 10:51 PM