It looks like very few of the tests have false positive rates in the percent range. Since most populations (with the exception of NYC and some other highly impacted places) do not have infection rates higher than a few percent, there is a danger of overestimating total infection rates and underestimating IFR using these tests. (See, e.g., the recent Stanford-USC papers.)

Sure Biotech seems to be an HK company, while Wondfo is in Guangzhou.


NYTimes: ... Each test was evaluated with the same set of blood samples: from 80 people known to be infected with the coronavirus, at different points after infection; 108 samples donated before the pandemic; and 52 samples from people who were positive for other viral infections but had tested negative for SARS-CoV-2.

Tests made by Sure Biotech and Wondfo Biotech, along with an in-house Elisa test, produced the fewest false positives.

A test made by Bioperfectus detected antibodies in 100 percent of the infected samples, but only after three weeks of infection. None of the tests did better than 80 percent until that time period, which was longer than expected, Dr. Hsu said.

The lesson is that the tests are less likely to produce false negatives the longer ago the initial infection occurred, he said.

The tests were particularly variable when looking for a transient antibody that comes up soon after infection, called IgM, and more consistent in identifying a subsequent antibody, called IgG, that may signal longer-term immunity.

“You can see that antibody levels rise at different points for every patient,” Dr. Hsu said. The tests performed best when the researchers assessed both types of antibodies together. None of the tests could say whether the presence of these antibodies means a person is protected from reinfection, however.

The results overall are promising, Dr. Marson added. “There are multiple tests that have specificities greater than 95 percent.”

From Table 2 in the paper: 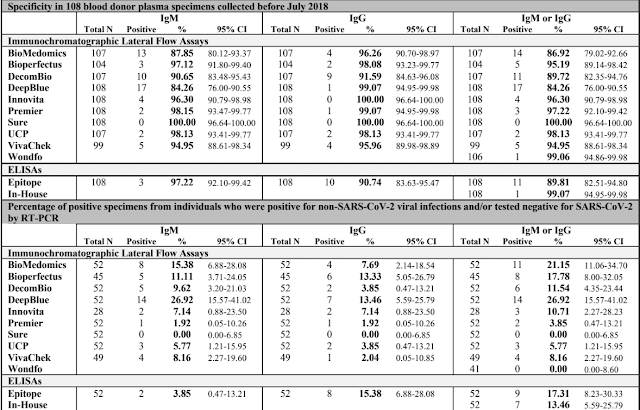 Dr. Patrick Hsu -- quoted in the Times article above, and a co-author of the paper -- is no relation, although we know each other. He has appeared in this blog before for his CRISPR work.
Posted by Steve Hsu at 9:21 AM