Kishore Mahbubani is Distinguished Fellow at the Asia Research Institute, National University of Singapore.
Kishore enjoyed two distinct careers: in diplomacy (1971 to 2004) and in academia (2004 to 2019). He is a prolific writer and speaker on geopolitics and East-West relations. He was twice Singapore’s Ambassador to the UN and served as President of the UN Security Council in January 2001 and May 2002. Mr. Mahbubani joined academia in 2004, when he was appointed the Founding Dean of the Lee Kuan Yew School of Public Policy (LKY School), NUS. He was Dean from 2004 to 2017.
In this episode Steve and Kishore discuss:
0:00 Introduction
2:52 Upbringing in Singapore and Asia's rise
11:35 How western thinking influences China-U.S. relations
23:05 Is China a threat to U.S. hegemony in Asia?
25:52 The United States' long-term strategy for China
32:13 How trade with ASEAN influences U.S.-China relations
40:58 Can ASEAN countries play a diplomatic role between U.S. and China
43:05 Xi Jinping's leadership and the zero-sum view of China
Links:
Can Asians Think? - https://mahbubani.net/can-asians-think/
The Asian 21st Century - https://mahbubani.net/the-asian-21st-century/
Has China Won? - https://mahbubani.net/has-china-won/
Transcript.
This Dutch documentary, which also features Mahbubani, is an excellent complement to our conversation.
Posted by Steve Hsu at 6:26 AM No comments:

New paper!
Informal summary: We built a polygenic health index using risk predictors weighted by lifespan impact of the specific disease condition. This index seems to characterize general health. Individuals with higher index scores have decreased disease risk across almost all 20 diseases (no significant risk increases), and longer calculated life expectancy. When estimated Disability Adjusted Life Years (DALYs) are used as the performance metric, the gain from selection among 10 individuals (highest index score vs average) is found to be roughly 4 DALYs. We find no statistical evidence for antagonistic trade-offs in risk reduction across these diseases. Correlations between genetic disease risks are found to be mostly positive and generally mild.

We construct a polygenic health index as a weighted sum of polygenic risk scores for 20 major disease conditions, including, e.g., coronary artery disease, type 1 and 2 diabetes, schizophrenia, etc. Individual weights are determined by population-level estimates of impact on life expectancy. We validate this index in odds ratios and selection experiments using unrelated individuals and siblings (pairs and trios) from the UK Biobank. Individuals with higher index scores have decreased disease risk across almost all 20 diseases (no significant risk increases), and longer calculated life expectancy. When estimated Disability Adjusted Life Years (DALYs) are used as the performance metric, the gain from selection among 10 individuals (highest index score vs average) is found to be roughly 4 DALYs. We find no statistical evidence for antagonistic trade-offs in risk reduction across these diseases. Correlations between genetic disease risks are found to be mostly positive and generally mild. These results have important implications for public health and also for fundamental issues such as pleiotropy and genetic architecture of human disease conditions. 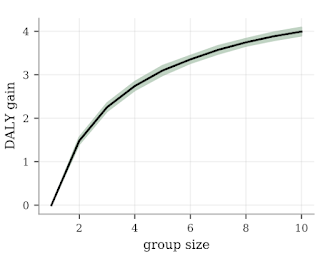 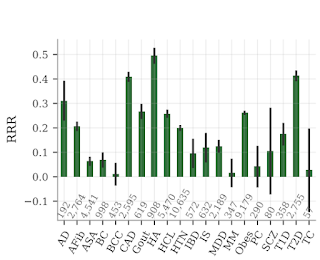 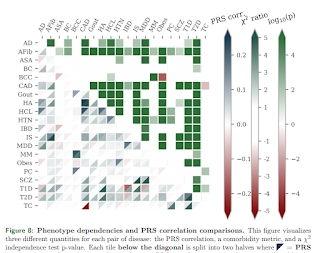 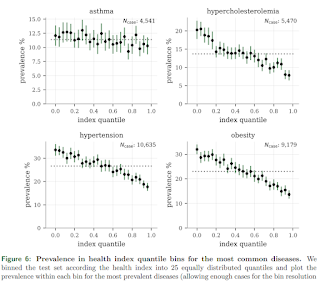 Extrapolating the DALY gain vs Health Index score curve (top figure) to the entire human population (e.g., 10 billion people) results in +30 or +40 DALYs more than average, or something like 120 total years of life.  The individual with the highest Health Index score in the world is predicted to live about 120 years.
I wanted to use this in the paper but my collaborators vetoed me 8-)

The days of our years are threescore years and ten; and if by reason of strength they be fourscore years, yet is their strength labour and sorrow; for it is soon cut off, and we fly away

Last week I was in Amsterdam and Utrecht to give seminars on quantum hair and black hole information at the Universities of Utrecht and Amsterdam. The organizers told me I was the first external visitor to give an in-person talk since the COVID lockdowns.
The Utrecht seminar went over 2 hours (unfortunately, 't Hooft was away) and the other over 90 minutes.
I will post video of the seminars at some point.
Now I am at the John Bell Institute on Hvar, Croatia for a special workshop on the black hole information puzzle.
This is the view of the Adriatic from the John Bell Institute, and the beach:
Institute of Physics, University of Amsterdam:
Posted by Steve Hsu at 1:55 AM No comments:

Gregory Clark is Distinguished Professor of Economics at UC-Davis. He is an editor of the European Review of Economic History, chair of the steering committee of the All-UC Group in Economic History, and a Research Associate of the Center for Poverty Research at Davis. He was educated at Cambridge University and received a PhD from Harvard University. His areas of research are long-term economic growth, the wealth of nations, economic history, and social mobility.
Steve and Greg discuss:
0:00 Introduction
2:31 Background in economics and genetics
10:25 The role of genetics in determining social outcomes
16:27 Measuring social status through marriage and occupation
36:15 Assortative mating and the industrial revolution
49:38 Criticisms of empirical data, engagement on genetics and economic history
1:12:12 Heckman and Landerso study of social mobility in US vs Denmark
1:24:32 Predicting cognitive traits
1:33:26 Assortative mating and increase in population variance
Links:
For Whom the Bell Curve Tolls: A Lineage of 400,000 English Individuals 1750-2020 shows Genetics Determines most Social Outcomes http://faculty.econ.ucdavis.edu/faculty/gclark/ClarkGlasgow2021.pdf
Further discussion: https://infoproc.blogspot.com/2021/03/genetic-correlation-of-social-outcomes.html
A Farewell to Alms: A Brief Economic History of the World https://en.wikipedia.org/wiki/A_Farewell_to_Alms
The Son Also Rises https://en.wikipedia.org/wiki/The_Son_Also_Rises_(book)
Transcript.
Posted by Steve Hsu at 1:34 PM No comments:

Von Neumann: The Interaction of Mathematics and Computing, by Stan Ulam.
See A History of Computing in the Twentieth Century, Edited by: N. METROPOLIS, J. HOWLETT and GIAN-CARLO ROTA.
More videos from the conference here. (Konrad Zuse!)
See at 50 minutes for an interesting story about von Neumann's role in the implosion mechanism for atomic bombs. vN apparently solved the geometrical problem for the shape of the explosive lens overnight after hearing a seminar on the topic. Still classified?

To solve this problem, the Los Alamos team planned to produce an “explosive lens”, a combination of different explosives with different shock wave speeds. When molded into the proper shape and dimensions, the high-speed and low-speed shock waves would combine with each other to produce a uniform concave pressure wave with no gaps. This inwardly-moving concave wave, when it reached the plutonium sphere at the center of the design, would instantly squeeze the metal to at least twice the density, producing a compressed ball of plutonium that contained about 5 times the necessary critical mass. A nuclear explosion would then result.

More here.
Posted by Steve Hsu at 5:53 PM No comments:

Genomic Prediction on WHYY The Pulse 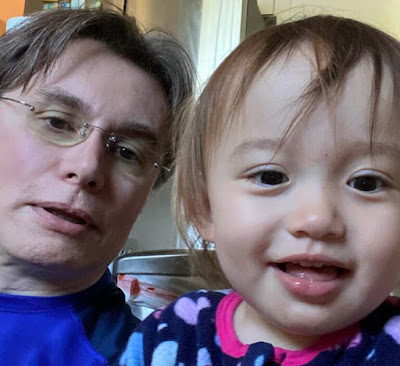 Aurea toddles around in her pink sparkly sneakers, climbing up the steps that, to her, are nearly waist high. Her tiny t-shirt is the epitome of how adorable she is. It says “you + me + snuggles.” Aurea’s father, Rafal Smigrodzki, watches over his little girl. He is clearly proud of her. “She’s very lively. I think she’s a pretty, pretty happy baby,” Smigrodzki said, “a very often smiley baby.”

Of course, Smigrodzki thinks his baby is special — most parents do. But Aurea is indeed unique. She was born almost two years ago and happens to be the first child born as the result of a new type of genetic screening, which carefully selected her embryo. Smigrodzki and his girlfriend used in vitro fertilization and an advanced selection process from a startup called Genomic Prediction.

The New Jersey startup offers genetic tests and promises to help prospective parents select embryos with the best possible genes. The company says its test can screen embryos for a variety of diseases and health conditions, like heart disease, diabetes, or breast cancer.

Smigrodzki, a neurologist with a PhD in genetics, stumbled across the company in 2017.

“I was always interested and reading about all kinds of new developments,” he said. “And just happened to read an article in the MIT Technology Review about Genomic Prediction.”

Transcript.
This interview with John Mearsheimer was conducted in 2020 on the original Manifold podcast with Corey Washington and Steve Hsu. Parts of the conversation are prescient with respect to US-China relations and the situation in Ukraine.
John Joseph Mearsheimer is an American political scientist and international relations scholar, who belongs to the realist school of thought. He is the R. Wendell Harrison Distinguished Service Professor at the University of Chicago. He has been described as the most influential realist of his generation.
Mearsheimer is best known for developing the theory of offensive realism, which describes the interaction between great powers as being primarily driven by the rational desire to achieve regional hegemony in an anarchic international system. In accordance with his theory, Mearsheimer believes that China's growing power will likely bring it into conflict with the United States.
Steve, Corey, and John discuss:
0:00 A quick message for listeners
1:21 Introduction
2:39 Realist foreign policy worldview
15:46 Proxy conflicts and the U.S.
21:31 U.S. history: a moral hegemon, or just a hegemon? Zinn and Chomsky
29:50 U.S.-China relationship, competing hegemonies?
36:44 Will Europe become more united?
41:23 China’s ambitions
46:12 Europe’s fragmentation and population trends
47:57 What drove U.S. interventions after the Cold War?
51:36 Coalitions and U.S.-China competition
Resources: John Mearsheimer - https://www.mearsheimer.com/
The Great Delusion: Liberal Dreams and International Realities - https://www.amazon.com/Great-Delusion-Liberal-International-Realities-ebook/dp/B07H3XRPQS
Posted by Steve Hsu at 6:20 AM No comments: