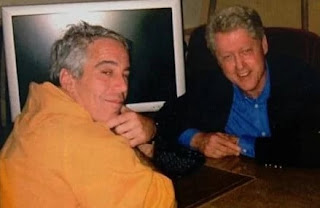 People talk about a future cybernetic era in which human intelligence will be fused in some way with machine intelligence (AI). To a degree, that era has already arrived. The GOOG AI watches almost everything I do -- not just my search queries, but pages I access via Chrome, seminars and interviews I watch on YouTube, my meetings on Google Calendar, what topics I discuss over gmail, where I travel, etc. I can now depend on it to make useful recommendations. (I hope the AI remains friendly to me in the future...)

This morning it suggested the interview below with Ari Ben-Menashe. Probably because it knows I have been interested in Jeffrey Epstein (see post Epstein and the Big Lie from Aug 2019), the activities of intelligence services (see, e.g., Twilight Struggles in a Wilderness of Mirrors: Admiral Mike Rogers, the NSA, and Obama-era Political Spying), and also nuclear weapons history.

Ben-Menashe was an Israeli intelligence operative, best known for his role in Iran-Contra in the 1980s. He was also one of the main sources for the book The Samson Option, by Sy Hersh (the journalist who uncovered both My Lai and Abu Ghraib). The Samson Option describes how the world became aware of the Israeli nuclear program, thanks to whistle-blower Mordechai Vanunu. After revealing the secret program to the British Sunday Times, Vanunu was kidnapped by Israeli intelligence agents, stood trial in Israel, and spent almost 20 years in prison. Ben-Menashe worked with publisher Robert Maxwell (Ghislaine Maxwell's father) to locate Vanunu in London and to capture him using a honey trap (female agent).

Ben-Menashe knew Jeffrey Epstein and Ghislaine Maxwell through Robert Maxwell. He states on the record that Epstein was involved in a honeypot operation for Israeli intelligence.

Ben-Menashe also comments on topics such as:


Epstein's "suicide" in MCC (where, by coincidence, Ben-Menashe was also held in the aftermath of Iran-Contra).

How Epstein could live and operate as if he had a 10-11 figure net worth when his actual wealth was one or two orders of magnitude less.

I do not know whether any of this is true, but I found the interview interesting.


Warning: in the comments I will censor anti-Jewish remarks.
Posted by Steve Hsu at 11:00 AM