I can't find a better reference for this than the Daily Mail, which may have garbled the results. But if the headline is correct, CFR ~ 0.4% (this may increase as the disease runs its course among the infected) and infection rate is just over 4% (1.6k infected / 36k tested). [ See update below the graph for better information. ]


Daily Mail: Iceland has tested one-tenth of its population for coronavirus at random and found HALF of people have the disease without realising - with only seven deaths in 1,600 cases

At the JHU coronavirus page, the latest numbers reported are 1700 infected with 8 dead, or CFR ~ 0.47%. From the graph below it appears that most infections in Iceland happened less than 2-3 weeks ago, suggesting that further deaths will result among the population currently infected. See here for comprehensive Iceland data. From the description there, about half the people tested were already in quarantine (e.g., due to contact tracing), so the Daily Mail claim that the results come from random sampling of the population does not seem correct.

But 4% infected (probably less, due to bias in sampling from quarantine) seems inconsistent with a super-rapid sweep, and is far short of herd immunity. [ See below for better information! ] 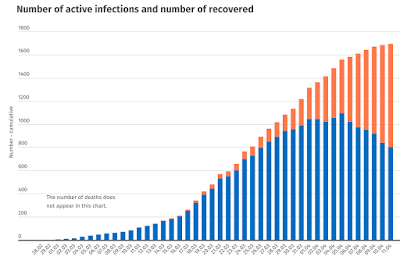 Added: I found a better source of information than the Daily Mail.


Iceland Review: ... The screenings of the general population have been carried out by Reykjavík-based medical research company deCODE genetics ...

CEO Dr. Kári Stefánsson: “Fifty per cent of those that test positive in our screenings of the general population are symptom-free at the time. Many of them get symptoms later,” Kári said.

Therefore, although about half of those who have tested positive for coronavirus in deCODE’s screenings did not have symptoms at the time, most of those who have tested positive developed symptoms at some point. A positive sample from an individual without symptoms means that the sample was most likely taken early in the virus’ incubation period, before symptoms such as dry cough or fever began to present themselves.

“DeCODE has now screened 10,401 individuals in Iceland. Of those, 92 were positive. So about 0.9% of those who we screened in the general population turned out to be positive. And that is probably the upper limit of the distribution of the virus in society in general,” Kári explained.

Interview: “The testing has been going on for 15 days – there was a little pause in the middle because we were missing swabs – but all of these 15 days, the rate of positives has been a little bit below one percent, which makes it likely that this is the true population prevalence. Today we are calling in people randomly, just selecting at random from the telephone directory. There is probably no perfect way to get a random sample. But I think it is very likely that the number is going to turn out in the end to be somewhat close to this number, probably somewhere between 0.5-1%.”

If the population prevalence of infection now is 0.5 to 1% (or 1.8k to 3.6k people in all of Iceland), then the 8 deaths imply an IFR in the range 0.22% to 0.44%. This should go up over time as many of the infections are early and we expect more deaths later. The 4% infection prevalence obtained using the Daily Mail numbers is probably an overestimate due to testing of already quarantined people -- DeCode has done about half the testing in Iceland, presumably using the random sampling method described by Stefansson, and another entity did the rest. All of this is aggregated in the current ~1.7k total confirmed cases as of now.

DeCode has genetic data on essentially all Icelanders, so should be able to identify alleles that make one more or less vulnerable to CV19.
Posted by Steve Hsu at 6:09 PM