Last night I had dinner with Ron Unz, a former theoretical physicist who has also been a software entrepreneur and a maverick political activist. We covered a wide range of issues, from science to technology to public policy. It was a real pleasure to talk to someone with such depth and breadth of understanding. Ron is yet another counterexample to those who claim that theoretical physicists can't do practical things. In fact, most former physicists I know end up doing very interesting and sometimes important things after leaving the field.

Both Ron and I are very concerned (perhaps even gloomy) about the future of America. He mentioned a disturbing statistic: the top 1 percent of Americans control as much wealth as the bottom 90 percent! Indeed, as discussed in this paper by NYU economist Edward Wolff, the rough breakdown is that the top 1 percent, the next 9 percent, and the remaining 90 percent each have about the same combined wealth! In the table below the most recent figures are for 2004. In the wake of the housing bubble I'd expect that the relative share of the rich has gone up a bit, since for average Americans a big chunk of their net worth is in their homes. US levels of inequality exceed those of other developed countries, but are comparable to China and still below (thank goodness) Mexico and Brazil. (See here for Gini Coefficients.) 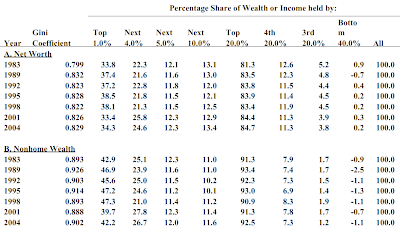 "He mentioned a disturbing statistic: the top 1 percent of Americans control as much wealth as the bottom 90 percent!". Just wondering why this is worrying in and of itself ? If the bottom 90% were starving it would be worrying but I'd be worried about them starving, not about the disparity in wealth. I think it's important to worry about the right thing. For example, I've read of a definition of those in poverty as the poorest 10% in a country (as an example of a bad definition in Henry Hazlitt's 'The Conquest of Poverty'). Obviously with this kind of definition you will always techincally have poverty no matter how rich a country becomes.

sarcasm is truly a lost art.

Actually, I think the variance in income inequality is mainly noise. Throughout recorded time, and probably since the end of the Neolithic Age, there have been three kinds of people in the world, the High, the Middle, and the Low. They have been subdivided in many ways, they have borne countless different names, and their relative numbers, as well as their attitude towards one another, have varied from age to age: but the essential structure of society has never altered. ;-)