Fear and loathing and hollowing out

Why have public sector unions become the welfare queens of recent political discourse?

NYTimes: ... In Ohio, economic decline has redrawn the map, devastating towns and cities, and making some places unrecognizable. Mr. Carner, now 70, recalled making a wrong turn at night in Toledo a number of years ago, not realizing where he was because population decline had left entire blocks abandoned and dark.

“We’re just a little bit afraid, like an old man who is trying to make his way, but is lost,” he said. “We used to be the big boys on the block, but the rest of the world is catching up with us in so many ways.”

Richard Freeman, an economist at Harvard, said he saw the hostility toward unions as a sign of decay in society. Some working-class people see so few possibilities for their lives that it is eroding the aspirational nature that has long been typical of Americans.

“It shows a hopelessness,” he said. “It used to be, ‘You have something I don’t have; I’ll go to my employer to get it, too. Now I don’t see any chance of getting it. I don’t want to be the lowest one on the totem pole, so I don’t want you to have it either.’ ”

See also this earlier post from 2005: Equilibration can hurt.

Here's Richard Freeman last year at Alibaba's (Chinese internet company) Hangzhou offices. When it comes to labor economics, Richard tells it like it is. 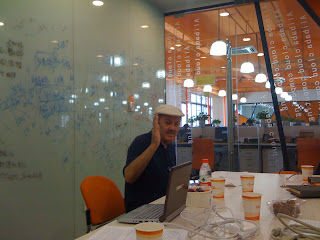 Emphatically No. A more accurate statement would be, "I have something the niggers don't have; my friends with the bats agree."

The more interesting aspect of all public policy debates to me is the role of the internet. State and local pay relative to private pay has
been rising for awhile, and, judging by newspaper editorials and the linked NY articles by professed leftists, no one would have known it prior
to the alternative outlets. This is the relation to welfare queens: people in 1980 saw Cadilllacs in the projects and knew something was
wrong with the system. Now alternative media relayed Milwaukee's estimate that the average teachers' salary is over $100k. People
know teachers, their effort, their credentials, and concluded that they're paid too much. This isn't a Haaarrrvaarrd level inquiry. The
unions overplayed their hand, and taxpayers are responding.

The "you have something I don't" theme alone isn't enough - you gotta add the tax-payer angle. It is like the banker/bonus bashing - "bankers were bailed out with my tax money, so I don't want to see them getting a bonus when I don't". Similarly "public servants are paid out of my tax dollars, so I don't want them having better employment terms than me".

As you mentioned in an earlier post on Delphi's bankruptcy, Steve, Delphi was only paying its worker $27 per hour, but benefits brought the total cost up to $65 per hour. This is very typical of what union/management negotiations will yield - to wit, kicking the can down the road - and down the road will be early retirement and fat pensions for both unions and management. While public companies that did this have gone bankrupt, the states enjoy monopoly pricing power in their taxes.

"While public companies that did this have gone bankrupt, the states enjoy monopoly pricing power in their taxes."

All of them? Even those without third world competition?

The pullulating masses of subhumanity bring wages down for those who have fewer children and it's all good because the more people the higher GDP. Hurrah!

Nice article, thanks for the information.

There are no union workers at investment banks, and the policy making branches of the government are either elected or patronage - and certainly non-union - jobs. Exactly what do the teachers' unions do to check the plutocracy? Last I checked, they spend the record high $ per student amount in the OECD to produce kids with the lowest competitive standardized test scores. How is this checking the plutocracy? I agree with you that the plutocracy should be checked, but seems to me that the unions are busy locking it in since if parents can't afford private school for their kids, then the democrats won't give them a voucher towards a private education, and the public teachers' union will make sure their kids don't learn enough to get an investment bank job.

Align your anger with your goals, my friend.

That is funny in a laughing-at-myself kind of way. We bill the government at 3.2x the cost of labor, which is pretty uniform in my industry [sellers of government specific goods and services to the government].