Michael Lewis on the subprime bubble 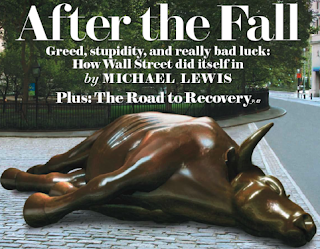 Michael Lewis nails it in this long Portfolio article. It's the single best piece I've read on the subject.

...In the two decades since then, I had been waiting for the end of Wall Street. The outrageous bonuses, the slender returns to shareholders, the never-ending scandals, the bursting of the internet bubble, the crisis following the collapse of Long-Term Capital Management: Over and over again, the big Wall Street investment banks would be, in some narrow way, discredited. Yet they just kept on growing, along with the sums of money that they doled out to 26-year-olds to perform tasks of no obvious social utility. The rebellion by American youth against the money culture never happened. Why bother to overturn your parents’ world when you can buy it, slice it up into tranches, and sell off the pieces?

At some point, I gave up waiting for the end. There was no scandal or reversal, I assumed, that could sink the system.

...Enter Greg Lippman, a mortgage-bond trader at Deutsche Bank. He arrived at FrontPoint bearing a 66-page presentation that described a better way for the fund to put its view of both Wall Street and the U.S. housing market into action. The smart trade, Lippman argued, was to sell short not New Century’s stock but its bonds that were backed by the subprime loans it had made. Eisman hadn’t known this was even possible—because until recently, it hadn’t been. But Lippman, along with traders at other Wall Street investment banks, had created a way to short the subprime bond market with precision.

Here’s where financial technology became suddenly, urgently relevant. The typical mortgage bond was still structured in much the same way it had been when I worked at Salomon Brothers. The loans went into a trust that was designed to pay off its investors not all at once but according to their rankings. The investors in the top tranche, rated AAA, received the first payment from the trust and, because their investment was the least risky, received the lowest interest rate on their money. The investors who held the trusts’ BBB tranche got the last payments—and bore the brunt of the first defaults. Because they were taking the most risk, they received the highest return. Eisman wanted to bet that some subprime borrowers would default, causing the trust to suffer losses. The way to express this view was to short the BBB tranche. The trouble was that the BBB tranche was only a tiny slice of the deal.

But the scarcity of truly crappy subprime-mortgage bonds no longer mattered. The big Wall Street firms had just made it possible to short even the tiniest and most obscure subprime-mortgage-backed bond by creating, in effect, a market of side bets. Instead of shorting the actual BBB bond, you could now enter into an agreement for a credit-default swap with Deutsche Bank or Goldman Sachs. It cost money to make this side bet, but nothing like what it cost to short the stocks, and the upside was far greater.

...But he couldn’t figure out exactly how the rating agencies justified turning BBB loans into AAA-rated bonds. “I didn’t understand how they were turning all this garbage into gold,” he says. He brought some of the bond people from Goldman Sachs, Lehman Brothers, and UBS over for a visit. “We always asked the same question,” says Eisman. “Where are the rating agencies in all of this? And I’d always get the same reaction. It was a smirk.” He called Standard & Poor’s and asked what would happen to default rates if real estate prices fell. The man at S&P couldn’t say; its model for home prices had no ability to accept a negative number. “They were just assuming home prices would keep going up,” Eisman says.

As an investor, Eisman was allowed on the quarterly conference calls held by Moody’s but not allowed to ask questions. The people at Moody’s were polite about their brush-off, however. The C.E.O. even invited Eisman and his team to his office for a visit in June 2007. By then, Eisman was so certain that the world had been turned upside down that he just assumed this guy must know it too. “But we’re sitting there,” Daniel recalls, “and he says to us, like he actually means it, ‘I truly believe that our rating will prove accurate.’ And Steve shoots up in his chair and asks, ‘What did you just say?’ as if the guy had just uttered the most preposterous statement in the history of finance. He repeated it. And Eisman just laughed at him.”

“With all due respect, sir,” Daniel told the C.E.O. deferentially as they left the meeting, “you’re delusional.”
This wasn’t Fitch or even S&P. This was Moody’s, the aristocrats of the rating business, 20 percent owned by Warren Buffett. And the company’s C.E.O. was being told he was either a fool or a crook by one Vincent Daniel, from Queens.

...That’s when Eisman finally got it. Here he’d been making these side bets with Goldman Sachs and Deutsche Bank on the fate of the BBB tranche without fully understanding why those firms were so eager to make the bets. Now he saw. There weren’t enough Americans with shitty credit taking out loans to satisfy investors’ appetite for the end product. The firms used Eisman’s bet to synthesize more of them. Here, then, was the difference between fantasy finance and fantasy football: When a fantasy player drafts Peyton Manning, he doesn’t create a second Peyton Manning to inflate the league’s stats. But when Eisman bought a credit-default swap, he enabled Deutsche Bank to create another bond identical in every respect but one to the original. The only difference was that there was no actual homebuyer or borrower. The only assets backing the bonds were the side bets Eisman and others made with firms like Goldman Sachs. Eisman, in effect, was paying to Goldman the interest on a subprime mortgage. In fact, there was no mortgage at all.

I agree; I've been reading about this stuff for the last couple of years trying to figure out what was going on, and that is the best description I've read.

This piece is enough to make one go out and buy a sniper rifle, and.....well, you can guess.

Failing that, what would have happened if, around mid-2005 or so, somebody had started making a huge stink and saying the bond rating agencies were completely full of shit and falling down on the job?

(PS: Somehow, Lewis's jocular tone starts to grate after a while.)

I didn't think it was all that informative, too much about Lewis and not enough about what's going on. I hope some book will do justice to this thing, there are many great and interesting stories that will come out of this.

Michael Lewis was interviewed on NPR's On the Media this past weekend. He'll be on Morning Edition with Steve Inskeep tomorrow.