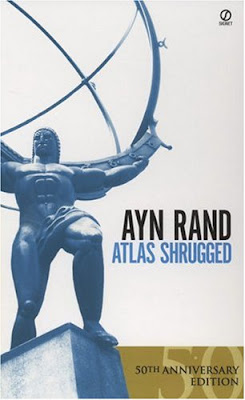 Read the whole thing at McSweeney's! The original is discussed here. Via Naked Capitalism.

Anyone willing to own up to their Objectivist philosophical leanings? :-)

"I heard the thugs in Washington were trying to take your Rearden metal at the point of a gun," she said. "Don't let them, Hank. With your advanced alloy and my high-tech railroad, we'll revitalize our country's failing infrastructure and make big, virtuous profits."

"Oh, no, I got out of that suckers' game. I now run my own hedge-fund firm, Rearden Capital Management."

He stood and adjusted his suit jacket so that his body didn't betray his shameful weakness. He walked toward her and sat informally on the edge of her desk. "Why make a product when you can make dollars? Right this second, I'm earning millions in interest off money I don't even have."

He gestured to his floor-to-ceiling windows, a symbol of his productive ability and goodness.

"There's a whole world out there of byzantine financial products just waiting to be invented, Dagny. Let the leeches run my factories into the ground! I hope they do! I've taken out more insurance on a single Rearden Steel bond than the entire company is even worth! When my old company finally tanks, I'll make a cool $877 million."

...Dagny and Hank searched through the ruins of the 21st Century Investment Bank. As they stepped through the crumbling cubicles, a trampled legal pad with a complex column of computations captured Dagny's attention. She fell to her hands and knees and raced through the pages and pages of complex math written in a steady hand. Her fingers bled from the paper cuts, and she did not care.

"Yes, it's an experimental formula for a financial strategy that could convert static securities into kinetic profits that would increase at an almost exponential rate."

Hank studied the numbers. "The amount of debt you would need to make this work would be at least 30-to-1, but a daring, rational man who lives by his mind would be willing to take that risk!"

"Yes, and it's so complex the government could never regulate it."

Ayn Rand wasn't a very good writer, and intellectually bankrupt into the bargain. It's a humorous parody, though.