Fear and loathing of the plutocracy

Did Paulson and Treasury deliberately overpay for shares in Goldman and eight other banks? What did taxpayers get for their $125 billion, versus what Buffet got for his $5 billion Goldman investment just a few weeks earlier? See Black-Scholes analysis here.

Will banks like Citi pay out bonuses using bailout funds? Citi plans to distribute $26 billion after receiving $25 billion from you and me. Will the public let them get away with it? Given the tremendous value destruction they've caused, on Wall Street and beyond, how can top executives at these companies justify any bonus compensation for themselves?

After leaving the Clinton administration, how did Rahm Emanuel make $16 million in two years (at Wasserstein Perella) with no prior business experience? Did you really think Obama was going to be a radical left president?

It may still take awhile before Wall Street finally accepts that it won't get paid.

At the moment, as their bony fingers fondle the new taxpayer loot, the firms appear to believe that they might still fool the public into thinking that bonus money isn't taxpayer money.

``We've responded appropriately to the attorney general's request for information about 2008 bonus pools,'' a Citigroup Inc. spokeswoman told Bloomberg News recently, ``and confirmed that we will not use TARP funds for compensation.'' But as the Bloomberg report noted, ``she declined to elaborate.''

As well she might! For if the Citigroup spokeswoman had elaborated she would have needed to say something like this: ``We're still trying to figure out how the $25 billion we've already taken of taxpayers' money has nothing to do with the $26 billion we're planning to hand out to our highly paid employees in 2008 (up 4 percent from 2007!). But it's a tricky problem because, when you think about it, it's all the same money.''

...If you are one of those people currently sitting inside a big Wall Street firm praying for some kind of bonus it may already have dawned on you that you need to rethink your approach. It's no longer any use to hint darkly that they had better fork over serious sticks or you'll bolt for Morgan Stanley. There's no point even in thinking up clever ways to make profits for your firm: who cares how much money you bring into Goldman Sachs if the U.S. Congress doesn't allow Goldman Sachs to pay bonuses?

The moment your firm accepted taxpayer money, you lost control of your money machine. ...

More from Michael Lewis at Portfolio Magazine (via Paul Kedrosky).


Figure from earlier post: Is the finance boom over? 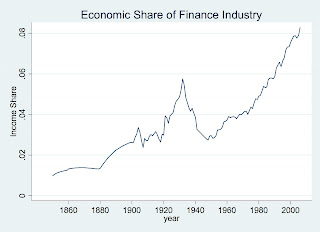 Interesting point on Emanuel. But I would say you're making it sound a bit more shady than it likely was. $8m for a managing director, per year, is pretty much nothing. And managing directors create the business through business and political connections. So, his compensation was likely based on how his firm did and how he did personally. And what did they do? Well, the firm is a matchmaker - an intermediary.

And no, I never thought Obama would be radical left. He's a centrist, imho, despite what people on the right believe. Although I am enjoying that they are now saying that he won by running like a Reagan conservative. Wait a minute, isn't he a leftist socialist? :)

I didn't want to imply that Paulson, Citi or Emanuel did or is doing anything illegal. The point is that moneyed interests are always going to be protected... even under Obama.

To paraphrase Jesus, "Ye have the rich always with you".

Obama has no choice but to give substantial roles in the administration to people friendly to the plutocracy. The only question is whether he has flexibility and nerve enough to include anybody *other* than the plutocracy. And then having done so -- will he dare *listen* to them?

Clinton had Robert Reich (among others) who plausibly was a non-plutocrat. But Reich lost all the internal battles and left early. If the Republicans had not taken Congress in '94, this might have played out differently. This time, with Dems in control of Congress and the economy in cardiac arrest, non-plutocrats just might get a brief influence before King Cash settles comfortably back on his throne.

King Cash? What cash? King Leverage is more like it. Most of the cash is Asian.

I think the clock could be running out on the plutocracy, and it's their own damned fault.

More from Steven Pearlstein in the Washington Post, on Citigroup, Sanford Weill, Robert Rubin, and Rubin's protégés in the Obama administration:

Although Rubin has been cagey about his role at Citigroup, what is indisputable is that all of the decisions that have led to Citi's recent troubles were taken while he was chairman of the executive committee and were made by executives whom he supported and with whom he worked closely day to day. He supported them when they were criticized, and as a director he approved compensation packages that rewarded them (and himself) handsomely for judgments that turned out to have been disastrous for the shareholders.