The best and the brightest: McGeorge Bundy 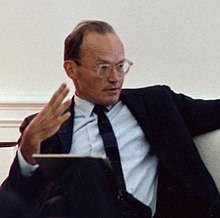 Bundy was the first National Security Advisor under Kennedy and Johnson (at the time the position was special assistant to the president for national security affairs), and perhaps the most infamous of Harvard Junior Fellows. Bundy, with McNamara, played a key role in shaping America's war in Vietnam.

How long will it be before the architects of our war in Iraq can admit their mistake? I suspect they are surpassed by Bundy not just in intelligence but, ultimately, integrity.


NYTimes: ...Bundy was the quintessential Eastern Establishment Republican, a member of a family that traced its Boston roots back to 1639. His ties to Groton (where he graduated first in his class), Yale and then Harvard were deep. At the age of 27, he wrote, to national acclaim, the ‘memoirs” of former Secretary of War Henry L. Stimson. In 1953, Bundy became dean of the faculty at Harvard — an astonishing responsibility for someone still only 34. Even David Halberstam, who would play so important a role in the public demolition of Bundy’s reputation in his classic, “The Best and the Brightest,” admitted that “Bundy was a magnificent dean” who played with the faculty “like a cat with mice.”

As he chose his team, Kennedy was untroubled by Bundy’s Republican roots —the style, the cool and analytical mind, and the Harvard credentials were more important. “I don’t care if the man is a Democrat or an Igorot,” he told the head of his transition team, Clark Clifford. “I just want the best fellow I can get for the particular job.” And so McGeorge Bundy entered into history — the man with the glittering résumé for whom nothing seemed impossible.

Everyone knows how this story ends: Kennedy assassinated, Lyndon B. Johnson trapped in a war he chose to escalate, Nixon and Kissinger negotiating a peace agreement and, finally, the disastrous end on April 30, 1975, as American helicopters lifted the last Americans off the roof of the embassy.

...Bundy spoke only occasionally about Vietnam after he left government, but when he did, he supported the war. Yet it haunted him. He knew his own performance in the White House had fallen far short of his own exacting standards, and Halberstam’s devastating portrait of him disturbed him far more deeply than most people realized. After remaining largely silent, — except for an occasional defense of the two presidents he had served — for 30 years, Bundy finally began, in 1995, to write about Vietnam. He chose as his collaborator Gordon Goldstein, a young scholar of international affairs. Together they began mining the archives, and Goldstein conducted a series of probing interviews. Bundy began writing tortured notes to himself, often in the margins of his old memos — a sort of private dialogue with the man he had been 30 years earlier — something out of a Pirandello play. Bundy would scribble notes: “the doves were right”; “a war we should not have fought”; “I had a part in a great failure. I made mistakes of perception, recommendation and execution.” “What are my worst mistakes?” For those of us who had known the self-confident, arrogant Brahmin from Harvard, these astonishing, even touching, efforts to understand his own mistakes are far more persuasive than the shallow analysis McNamara offers in his own memoir, “In Retrospect.”

...As it happens, I was part of a small group that dined with Bundy the night before Pleiku at the home of Deputy Ambassador William J. Porter, for whom I then worked. Bundy quizzed us in his quick, detached style for several hours, not once betraying emotion. I do not remember the details of that evening — how I wish I had kept a diary! — but by then I no longer regarded Bundy as a role model for public service. There was no question he was brilliant, but his detachment from the realities of Vietnam disturbed me. In Ambassador Porter’s dining room that night were people far less intelligent than Bundy, but they lived in Vietnam, and they knew things he did not. Yet if they could not present their views in quick and clever ways, Bundy either cut them off or ignored them. A decade later, after I had left the government, I wrote a short essay for Harper’s Magazine titled “The Smartest Man in the Room Is Not Always Right.” I had Bundy — and that evening — in mind.


...In February, he and I overlapped briefly in Saigon, and we had one quiet talk. On my return to Washington, I learned that Mac had told the NSC staff he was optimistic about the war, but, much to my astonishment, that they they should wait to hear my very different views.

In 1968, after I wrote a critique of Vietnam policy in The Atlantic, Mac chastised me for betraying LBJ's trust. We didn't make up for eight years. By then I was running Harvard's Nieman Fellowships for journalists, and Mac came to talk to the fellows.

He was crisply articulate, but there was one persistent young man, who resembled Trotsky, needling Mac with questions about the war. Mac finally cut him off saying, "Your problem, young man, is not your intellect but your ideology."

Later, as we were clinking highballs, the Trotsky look-alike cornered Mac: " What about Vietnam?"

Bundy: "I don't understand your question."

Trotsky: "Mac, what about (italics)you(end italics) and Vietnam?"

Trotsky: "But Mac, you screwed it up, didn't you?"

Glacial silence. Then Bundy suddenly smiled and replied: "Yes, I did. But I'm not going to waste the rest of my life feeling guilty about it."

When he died, McGeorge Bundy was working on a book about the war whose main message was that Vietnam was a terrible mistake.

It's a loss that he did not live to write in full what he had learned from the Vietnam calamity.

I recommend The Color of Truth, Kai Bird's biography of the Bundy brothers. Bird wrote the recent biography of Oppenheimer, American Prometheus.
Posted by Steve Hsu at 10:49 AM

No survey of Bundy is complete without the Conant anecdote. James Bryant Conant was President of Harvard when Bundy came up for a position in Political Science, after his Junior Fellow gig. Bundy had been a math major at Yale because he could pick it up fast with his astronomical IQ and it meant hours and hours of A grades without study, leaving time for more important activities like the Yaley Daily and, of course, Skull & Bones. There's no indication he was really engaged by mathematics or tried to make a contribution. But along the way, he hadn't found time for a course in Political Science, and he was being put up for a position in the department. Conant was assured that it didn't matter, and that Bundy was such a brilliant polymath, he'd pick up any details as needed. As he signed the papers, Conant sighed and muttered "This would never happen in Chemistry".

"How long will it be before the architects of our war in Iraq can admit their mistake? I suspect they have far less intelligence and, ultimately, integrity than Bundy."

We don't know how big a mistake the Iraq war is, or if it's a mistake at all. Only time will tell. We don't even have the full story on WWII yet and its aftermath. After all the victors have largely written the history.

Even if one overlooks the fraudulent pretext, one can safely conclude that our actions in Iraq were largely a botch. There is a reason why Kenneth Adelman concluded a few years ago, about the Bush administration, that "these are not serious people".

Things have gone better recently, but one could well chalk up much of the credit we might take for that to "putting the Lord's work in your pile". The Iraqi people and government have been slowly coming to grips with the prospect of life after the U.S. withdrawal. This was going to happen sooner or later. And there are no guarantees; look what India has just experienced.

One thing is for sure; we are in no position to pull any more such stunts. It makes one shudder to think that similar action had been contemplated against Iran as a follow-up.