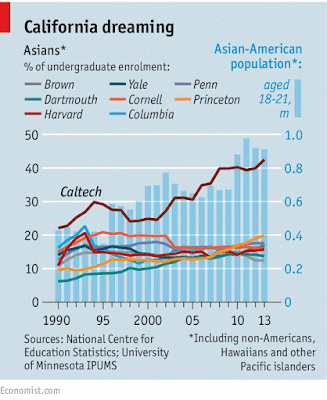 By coincidence, I was just in contact over the weekend with several of the people involved in the effort to end discrimination against Asian Americans in elite college admissions.
This has been a long road, but perhaps victory is near.

... SFFA founder Edward J. Blum, who has spearheaded more than two dozen lawsuits challenging affirmative action and voting rights laws around the U.S., heralded the court’s move. “Harvard and the University of North Carolina have racially gerrymandered their freshman classes in order to achieve prescribed racial quotas,” he wrote in a statement. “Every college applicant should be judged as a unique individual, not as some representative of a racial or ethnic group.”

See previous posts:
Former Yale Law Dean on Harvard anti-Asian discrimination case: The facts are just so embarrassing to Harvard... Quotas and a climate of dishonesty

... The facts are just so embarrassing to Harvard that with some modest adjustment in its admissions practices it might be able to absorb a judgment against it and get on with life more or less as usual. The vagueness of the category on which Harvard was relying to make sure that it kept its Asian undergraduates at the level that it wished, the so-called personality score, is such a floppy nothing of an empty basket — that’s not gonna do anymore.

There is something profoundly disturbing about Harvard using these flaccid categories to achieve something like a quota. The court papers show how the system was invented to keep the number of Jews down in the late 1920s and early 1930s. It’s all pretty bad, and part of the badness is that colleges have been both compelled and allowed to do what they’re doing under the rubric of "diversity," which conceals from view the actual operation of the whole system, and what they are in fact aiming to achieve. It’s substituting one vocabulary for another in a way that creates a climate of dishonesty. What goes on in the admissions office is increasingly mysterious, and what happens once students are admitted — that is something to which little attention is paid by educators themselves.