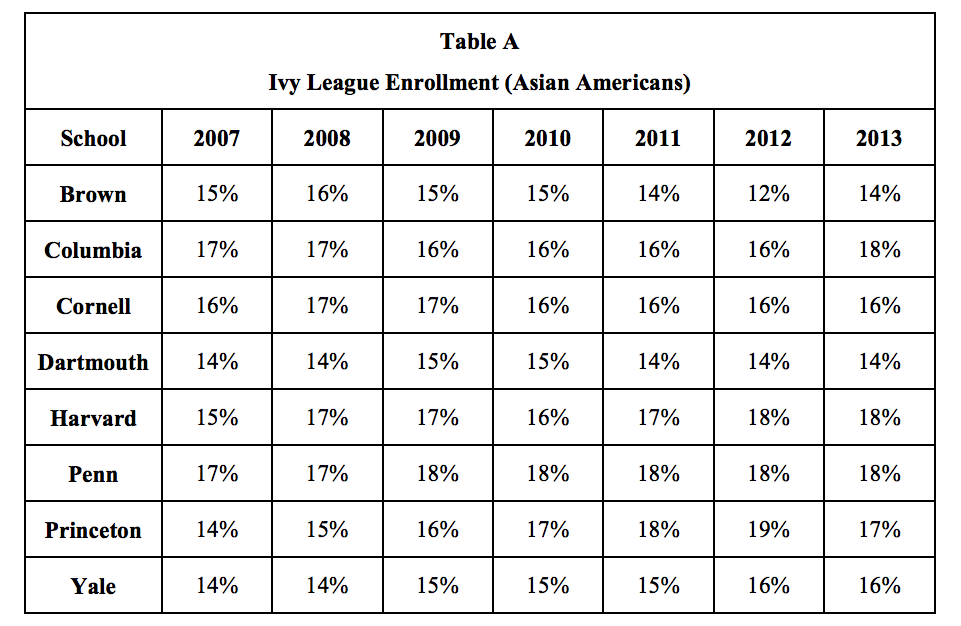 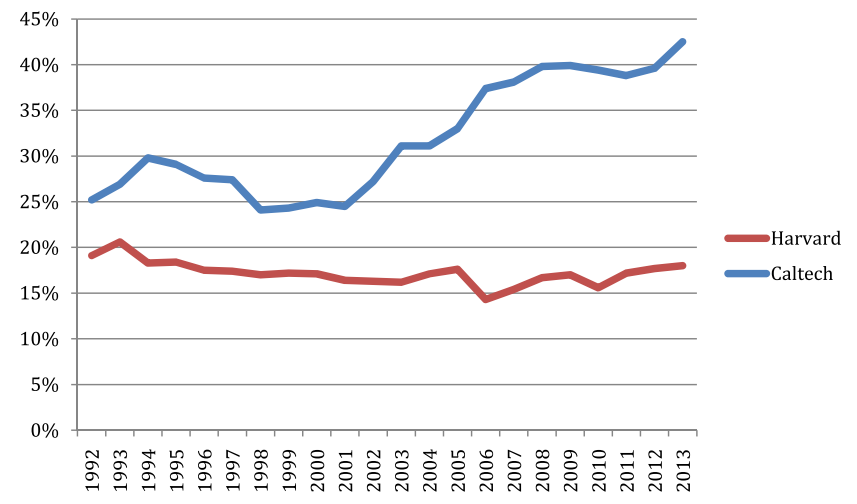 This is the brief filed yesterday against Harvard, alleging discrimination against Asian-American applicants. A related suit was filed against UNC, with perhaps another to come against Wisconsin. Re: the graph above, note that Caltech has race-blind admissions.


... Harvard is engaging in racial balancing. Over an extended period, Harvard’s admission and enrollment figures for each racial category have shown almost no change. Each year, Harvard admits and enrolls essentially the same percentage of African Americans, Hispanics, whites, and Asian Americans even though the application rates and qualifications for each racial group have undergone significant changes over time. This is not the coincidental byproduct of an admissions system that treats each applicant as an individual; indeed, the statistical evidence shows that Harvard modulates its racial admissions preference whenever there is an unanticipated change in the yield rate of a particular racial group in the prior year. Harvard’s remarkably stable admissions and enrollment figures over time are the deliberate result of systemwide intentional racial discrimination designed to achieve a predetermined racial balance of its student body.

The statistical signal of managing fluctuations from year to year (evidence of a race-based target as opposed to independent individual consideration of applicants) might be even stronger for lesser Ivys, which probably see larger variations in yield compared to Harvard. It will be fascinating to see Harvard administrators and admissions officers testifying under oath as to how enrollment by ethnic group has been kept so stable over the years. Legal analysis on SCOTUSblog.

The historical parallels with anti-semitic practices of the early 20th century are reviewed in detail:


... In a letter to the chairman of the committee, President Lowell wrote that “questions of race,” though “delicate and disagreeable,” were not solved by ignoring them. The solution was a new admissions system giving the school wide discretion to limit the admission of Jewish applicants: “To prevent a dangerous increase in the proportion of Jews, I know at present only one way which is at the same time straightforward and effective, and that is a selection by a personal estimate of character on the part of the Admissions authorities ... The only way to make a selection is to limit the numbers, accepting those who appear to be the best.”

... The reduction in Jewish enrollment at Harvard was immediate. The Jewish portion of Harvard’s entering class dropped from over 27 percent in 1925 to 15 percent the following year. For the next 20 years, this percentage (15 percent) remained virtually unchanged.

... The new policy permitted the rejection of scholastically brilliant students considered “undesirable,” and it granted the director of admissions broad latitude to admit those of good background with weaker academic records. The key code word used was “character” — a quality thought to be frequently lacking among Jewish applicants, but present congenitally among affluent Protestants.

This is what our country has come to:


... According to the Princeton Review: "Asian Americans comprise an increasing proportion of college students nationwide. Many Asian Americans have been extraordinarily successful academically, to the point where some colleges now worry that there are ‘too many’ Asian Americans on their campuses. Being an Asian American can now actually be a distinct disadvantage in the admissions processes at some of the most selective schools in the country ...

Please do not comment on this post unless you have read the brief. Comments that are dealt with directly in the brief will be deleted. I hope at least a few serious journalists take the time to read it.

See also Defining Merit, and my Bloomberg editorial on this subject: Transparency in College Admissions.


... Schools like Harvard and Princeton brag that each year they reject numerous applicants ... who score a perfect 2400 on the SAT. How would we feel if it were revealed that almost all of these rejected top scorers, year after year, were Asian-Americans? I challenge Harvard and Princeton to refute this possibility.


Addendum: this is one of the plaintiffs, who was rejected by Harvard.


17. Applicant’s parents are first-generation immigrants to the United States from China.

18. Applicant graduated from high school ranked 1 out of 460 students by weighted and un-weighted grade point average.

19. U.S. News and World Report ranks Applicant’s high school in the top 5 percent of all high schools in the United States.

21. While in high school, Applicant participated in numerous extracurricular and volunteer activities. Among other things, Applicant was captain of the varsity tennis team, volunteered at a community tennis camp, volunteered for the high school’s student peer tutoring program, was a volunteer fundraiser for National Public Radio, and traveled to China as part of a program organized by the United States Consulate General and Chinese American Students Education and Exchange to assist students in learning English writing and presentation skills.

Mistake on page 41, paragraph 187: Early admissions are not binding at Harvard.

Very happy to see this. Thought this might never change.

Prior to the celebrated article by Ron Unz that the brief mentioned, I drew his attention to rising Asian SAT scores after he claimed that Hispanic Wordsum scores had dramatically risen.

If all Unz wanted to prove was that the “Strong IQ Hypothesis” fails to account for the malleability of cognitive results, he could have cited the Asian advancement on the SAT.

There are lots of quotes in the article, but its not totally clear what sources they are from. Each Paragraph with quotes should have footnotes or other citations to make its sources clear.
There may be some use of scare quotes and irony quotes. Similarly, many paragraphs asserting facts have no citations.
Throughout the early stage in the article, they assert Harvard's current practices are, as a fact, discriminatory without first showing that they are discriminatory. In my opinion, they should first present their detailed argument that they are discriminating (which is the point of the lawsuit), and only then use that language.

I am sympathetic to the cause, but this pleading is pretty ridiculous. It’s supposed to be a complaint,
not a “brief” or an “article.” (See the title on the first page.) Under Rule 8, a federal complaint
should contain “a short and plain statement of the claim showing that the
pleader is entitled to relief.” This document has 427 paragraphs of allegations,
anecdotes, quotations, tables, historical summaries, case citations, and
argument (and that’s all before “Count I”!) There is no way that it complies
with the letter or the spirit of federal pleading.

More substantively, the plaintiffs confuse disparate treatment (direct and
intentional) discrimination with disparate impact (indirect and possibly unintentional)
discrimination. The biggest problem, though, is the conflict between what the
plaintiffs explicitly request as relief and what they really want. Consider
this hypothetical: Suppose Harvard abolished its current admissions process and
implemented a ZIP code preference—as proposed in paragraph 315—and that resulted
in the admission of fewer (!) Asian-American students than are admitted now. Given
the geographic distribution of Asian-Americans in the United States, that is
not at all far-fetched. The plaintiffs would not find that result satisfactory.
In fact, most of the proposed alternatives in this complaint are likely to have
some negative disparate impact on Asian-Americans, but the plaintiffs suggest
that they would be acceptable because they are not directly discriminatory. (Interestingly,
the plaintiffs attack two other practices with disparate impact—legacy and
donor admissions—because the beneficiaries are generally white.)

I understand why the plaintiffs offer alternatives
with a discriminatory disparate impact—they want to undercut at the outset the
university’s argument that racial preferences are a legitimate “last resort”
for “achieving diversity.” Unfortunately, by conceding the premise that the
university should subordinate merit to diversity, they significantly weaken the
force of their own argument and give the university a way to reach similar
results through different means.

I support the plaintiff case here. Although Harvard has the right to
pursue a diverse class, it needs to use race as one of MANY factors.
Once it becomes a decisive factor and Harvard places artificial quotas,
it's a violation of the 1964 Civil Rights Act. I read a good chunk of
the brief, and they use compelling data to show that race is indeed
keeping a lot of Asian-Americans out. If race was indeed being used as
merely one of many factors, one would expect to see the credentials of
the black and hispanic students more or less in line with that of Asians
and whites. However, that is nowhere near the case.

I am
doubtful that this lawsuit will go far. Even if the Supreme Court hears
it, it will be very difficult for the plaintiff to prove that Harvard
was in the wrong since Title VI of the 1964 Civil Rights Act is fairly
broad.

The Economist reviewed a similar issue earlier this year, albeit from a bit of a different angle.
www.economist.com/node/21599369/

Looking through the lawsuit, I am bit concerned about a lack of financial sophistication. It would be more appropriate to use the word "immaterial" instead of "substantial" in the following passage:

It seems that Harvard's acceptance of direct federal funding is key to the lawsuit. (The role of indirect financial assistance via student loans is unclear to me.) Very, very few universities have the benefit of such a large endowment. If Harvard has preferences it does not want to change, and / or it does not want to deal with lawsuits like this going forward, it may decide to not accept federal funding in future years. There has to be more to the lawsuit's legal claims than this, right?

according to Unz the most discriminated against group in elite college

admissions is white gentiles who don't have rich parents.

but steve loves to chink it up.

he should go back to china.

No. We need both Asian and Jewish quotas if we are going to fairly spread the burden of lifting our cognitively challenged Blacks and Hispanics. Instead, we have only partial Asian quotas and likely some Jewish ethnic nepostism, meaning that gentile Whites get screwed. This society is committed to discriminating for Hispanic and Blacks. Asians should be good Americans and accept that burden.

So you're saying they should've hired jewish lawyers?

Top univiersities have been discriminating against Asians for more than 20 years - Berkeley got caught at it in the late 80s. http://www.pbs.org/wgbh/pages/frontline/shows/sats/race/summary.html

Well this is what you get in a "nation" which is just a bunch of ethnic groups and cultures thrown together and held together by adhesive tape.

Asians did not create, build, or shape Americas universities. Now they come here to our country, demanding we not only let them in our best schools (which we do), but change our admission metrics to favor them even more.

There are universities in Asia, built by Asians, which admit solely on the basis of test scores. But you want OUR schools, our prestige, and have no desire to pay your dues first or respect our customs.

Hello there, I discovered your website by means of Google while looking for a similar topic, your web site got here up, it looks good. I've bookmarked it in my google bookmarks.
Hello there, just became alert to your weblog via Google, and found that it's really informative. I'm gonna watch out for brussels. I will appreciate should you proceed this in future. Lots of other folks shall be benefited out of your writing. Cheers!