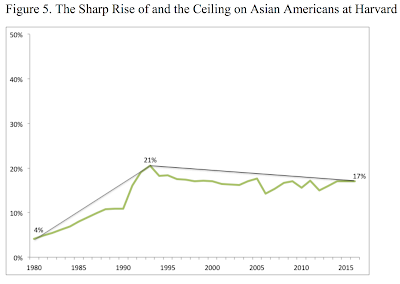 Harvard and Students For Fair Admissions (SFFA), which is suing Harvard over discrimination against Asian-American applicants, have released a large set of documents related to the case, including statistical analysis of records of more than 160,000 applicants who applied for admission over six cycles from 2000 to 2015.

The following point does not require any sophisticated modeling (with inherent assumptions) or statistical expertise to understand.

Harvard admissions evaluators -- staffers who are likely under pressure to deliver a target mix of ethnicities each year -- rate Asian-American applicants far lower on subjective personality traits than do alumni interviewers who actually meet the applicants. The easiest way to limit the number of A-A admits each year would be to penalize them on the most subjective aspects of the evaluation...

As stated further below: When it comes to the score assigned by the Admissions Office, Asian-American applicants are assigned the lowest scores of any racial group. ... By contrast, alumni interviewers (who actually meet the applicants) rate Asian-Americans, on average, at the top with respect to personal ratings—comparable to white applicants...

Yet Harvard’s admissions officials assign Asian Americans the lowest score of any racial group on the personal rating—a “subjective” assessment of such traits as whether the student has a “positive personality” and “others like to be around him or her,” has “character traits” such as “likability ... helpfulness, courage, [and] kindness,” is an “attractive person to be with,” is “widely respected,” is a “good person,” and has good “human qualities.” Importantly, Harvard tracks two different personal ratings: one assigned by the Admissions Office and another by alumni interviewers. When it comes to the score assigned by the Admissions Office, Asian-American applicants are assigned the lowest scores of any racial group. ... By contrast, alumni interviewers (who actually meet the applicants) rate Asian Americans, on average, at the top with respect to personal ratings—comparable to white applicants and higher than African-American and Hispanic applicants.

See also Too Many Asian Americans: Affirmative Discrimination in Elite College Admissions. (Source of figure at top; the peak in A-A representation at Harvard, in the early 1990s, coincides with external pressure from an earlier DOJ investigation of the university for discrimination.)

Here's an exchange in the Harvard lawsuit in which a a teacher at Stuyvesant started to cry when she was shown data that showed her Asian students were *half* as likely to be admitted to Harvard as her white students in 2014 pic.twitter.com/EfjBeBFgfy
— Molly Hensley-Clancy (@mollyhc) June 15, 2018

For the statistically sophisticated, see Duke Professor Arcidiacono's rebuttal to David Card's analysis for Harvard. If these entirely factual and easily verified characterizations of Card's modeling (see below) are correct, the work is laughable.


Professor Card’s models are distorted by his inclusion of applicants for whom there is no reason to believe race plays any role.

As my opening report noted, there are several categories of applicants to whom Harvard extends preferences for reasons other than race: recruited athletes, children of faculty and staff, those who are on the Dean’s List or Director’s List [i.e., Big Donors], legacies, and those who apply for early admission.1 Because of the significant advantage that each of these categories confers on applicants, my report analyzed the effect of race on an applicant pool without these special categories of applicants (the baseline dataset), which allowed me to test for the effect of race on the bulk of the applicant pool that did not fall into one of these categories.2

Professor Card further exacerbates this problem by including in his calculations the large majority of applicants whose characteristics guarantee rejection regardless of their race. Harvard admits a tiny fraction of applicants – only five or six percent in recent years. This means that a huge proportion of applicants have no realistic chance of admission. If an applicant has no chance of admission, regardless of his race, then Harvard obviously does not “discriminate” based on race in rejecting that applicant. Professor Card uses this obvious fact to assert that Harvard does not consider race at all in most of its admissions decisions. Further, he constructs his models in ways that give great weight to these applicants, again watering down the effect of race in Harvard’s decisions where it clearly does matter. (To put it in simple terms, it is akin to reducing the value of a fraction by substantially increasing the size of its denominator.)


Professor Card removes interaction terms, which has the effect of understating the penalty Harvard imposes on Asian-American applicants.

Professor Card rightly recognizes that interaction terms should be included in a model when there is evidence that racial preferences operate differently for particular groups of applicants; yet he nonetheless removes interaction terms for variables that satisfy this condition. The most egregious instance of this is Professor Card’s decision not to interact race with disadvantaged status—even though the data clearly indicate that Harvard treats disadvantaged students differently by race.

Professor Card’s report changes none of my conclusions; to the contrary, given how easy it is to alter the results of his models and that my own models report the same results even incorporating a number of his controls, my opinions in this case have only been strengthened: Harvard penalizes Asian-American applicants; Harvard imposes heavy racial preferences in favor of Hispanic and African-American applicants; and Harvard has been manipulating its admission of single-race African-American applicants to ensure their admission rate approximates or exceeds the overall admission rate. Professor Card has demonstrated that it is possible to mask the true effects of race in Harvard’s admission process by changing the scope of the analysis in incorrect ways and choosing inappropriate combinations of control variables. But Professor Card cannot reach these results by applying accepted statistical methods and treating the data fairly.