This is my third post discussing the Students For Fair Admissions lawsuit against Harvard over discrimination against Asian-American applicants. Earlier posts here and here discussed, among other things, the tendency of the Admissions Office to assign low personal ratings to A-A applicants. A-As received, on average, the lowest such ratings among all ethnic groups from the Admissions Office. In contrast, alumni interviewers (who actually met the candidates) gave A-A applicants scores comparable to white applicants, and higher than other ethnic groups.

Harvard's Office of Institutional Research (OIR) produced a series of internal reports on discrimination against Asian-American applicants, beginning in 2013. They attempted to model the admissions process, and concluded there was outright penalization of A-A applicants:


Mark Hansen, the (now former) OIR employee, remembers far more. He remembers working with others in OIR on the project. He remembers gathering data, conducting the regression analysis, collaborating with colleagues, coordinating with the Admissions Office, and discussing the results of OIR’s investigation with Fitzsimmons and others on multiple occasions.  Hansen expressed no concerns with the quality and thoroughness of OIR’s statistical work. Moreover, he has a clear understanding of the implications of OIR’s findings. Hansen testified that the reports show that Asian Americans “are disadvantaged in the admissions process at Harvard.” And when asked: “Do you have any explanation other than intentional discrimination for your conclusions regarding the negative association between Asians and the Harvard admissions process?” Hansen responded: “I don’t.”

The figures below show several OIR models which try to fit the observed admit rates for various groups. The only model that comes close (Model 4) is one which assigns outright penalties to A-A applicants (using "demographic" -- i.e., explicitly racial -- factors). IIUC, this is *after* the low Personal Rating scores from the Admissions Office have already been accounted for!

In the decades leading up to the data discovery forced by the SFFA lawsuit, we heard many claims that legacy / recruited athlete status, or leadership characteristics, or extracurriculars, were the reasons for A-As having such a low acceptance rate (despite their strong academic records). The OIR analysis shows that these effects, while perhaps real, are only part of the story. In Model 4, pure racial bias reduces the A-A percentage of the entering class from 26% (after accounting for all the factors listed above) to the actual 18-19%! 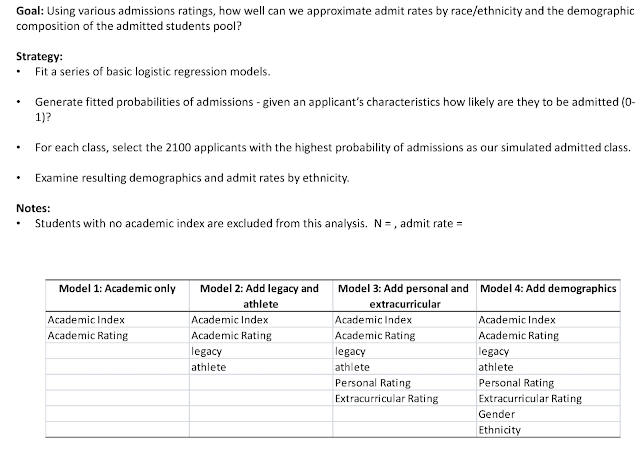 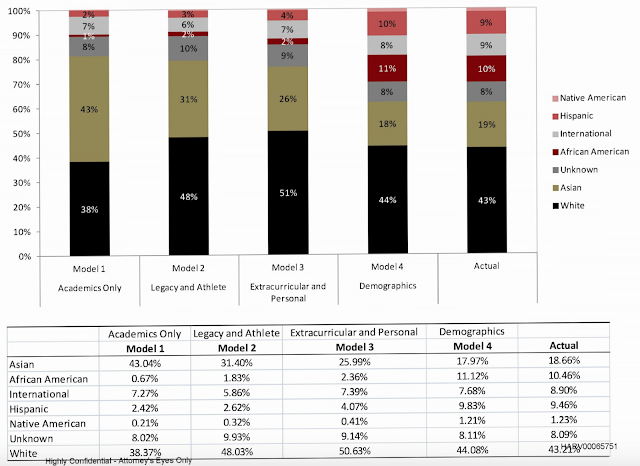 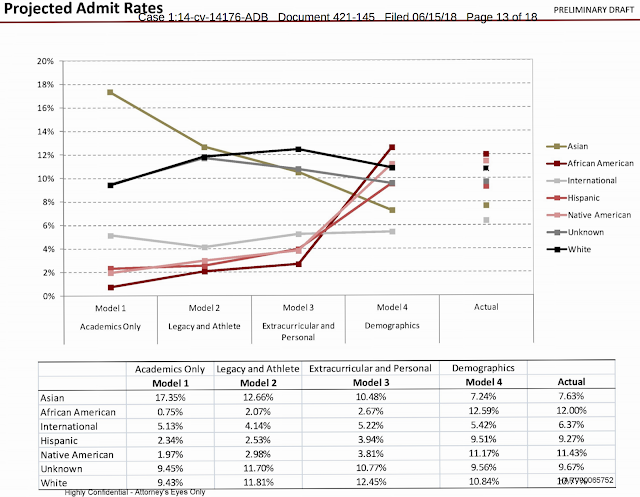