Mootoo Kimura: "do something in genetics ... like theoretical physics" 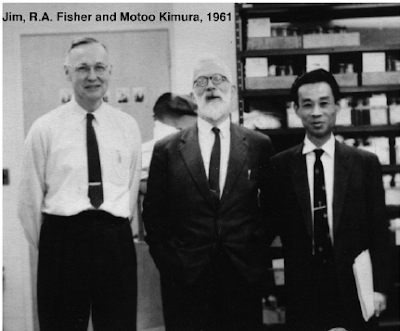 I have written previously about James Crow and R.A. Fisher. Now to Mootoo Kimura.


Wikipedia: Motoo Kimura (木村 資生 Kimura Motō) (November 13, 1924 – November 13, 1994) was a Japanese biologist best known for introducing the neutral theory of molecular evolution in 1968.[2][3] He became one of the most influential theoretical population geneticists. He is remembered in genetics for his innovative use of diffusion equations to calculate the probability of fixation of beneficial, deleterious, or neutral alleles.[4] Combining theoretical population genetics with molecular evolution data, he also developed the neutral theory of molecular evolution in which genetic drift is the main force changing allele frequencies.[5] James F. Crow, himself a renowned population geneticist, considered Kimura to be one of the two greatest evolutionary geneticists, along with Gustave Malécot, after the great trio of the modern synthesis, Ronald Fisher, J. B. S. Haldane and Sewall Wright.[6]

What is the fate of the neutral theory? I suppose the fundamental question is what fraction of molecular changes (mutations) have significant phenotypic effects (i.e., effects on fitness). If the fraction is very small then one could, at the molecular level, adopt the neutral theory as a first approximation. (At the level of phenotypes, I can't see drift dominating unless the effective population size is very small.) Still unsettled?


Wikipedia: ... According to Kimura, the theory applies only for evolution at the molecular level, and phenotypic evolution is controlled by natural selection, as postulated by Charles Darwin. The proposal of the neutral theory was followed by an extensive "neutralist-selectionist" controversy over the interpretation of patterns of molecular divergence and polymorphism, peaking in the 1970s and 1980s. Since then, much evidence has been found for selection at molecular level.

The article Kimura & Crow: Infinite alleles, appeared in Genes to Genomes, the blog of the Genetics Society of America. (See also here ;-)


... Kimura was originally trained as a plant cytologist; he had been fascinated by plants since boyhood, and cytogenetics had been the hot field in Japan at the time. But his interest in chromosomes waned as he began yearning to “do something in genetics like what the theoretical physicists were doing in physics.” This ambition was buoyed by Kimura’s regular, hunger-fueled excursions to the house of his cousin-in-law Matsuhei Tamura, a mathematical physicist. Kimura visited almost every Sunday, partly because he was intensely interested in the quantum physicist’s stories, and partly because he needed to fill his belly during the post-war food shortages.

Kimura joined the lab of Japan’s most famous cytogeneticist, Hitoshi Kihara, who recognized the quiet young man’s talent for theory and left him mostly to his own devices. So, while his friends picked apart the chromosomes of wheat and watermelon, Kimura indulged in the more abstract pleasures of population genetics. He would travel the full-day’s train journey to Tokyo to copy out by hand the papers of Sewall Wright, one of the founders of the field. Determined to understand Wright’s papers, Kimura haunted the math department, attending classes, asking questions, learning from books, until he gradually gained the sophistication to follow Wright’s arguments, and eventually, critique and extend them.

But this new intellectual world was isolating. Kimura’s lab mates took a dim view of his absorption in mathematics and the situation only worsened when he took a job at the newly founded National Institute of Genetics. The facility was housed in the makeshift and uncomfortable office of a wartime aircraft factory. There was no library, no access to foreign journals, and no colleague who could understand his work. The only geneticist there who saw its value was zoologist Taku Komai, who had studied in the fly lab of genetics superstar T. H. Morgan in the United States. Komai recommended Kimura extend his training overseas and introduced him to an American scientist working for the Atomic Bomb Casualty Commission. Before long Kimura had a scholarship, a Fulbright travel award, and a ticket to Seattle.

Once they met, Crow immediately took Kimura under his wing. He invited Kimura over for dinner to meet his idol Sewall Wright. Crow probed Kimura about the paper he had just written on the Pacific voyage and was impressed that it neatly reduced a formidably complex equation down to a simple relationship used by physicists to describe heat conduction. He encouraged Kimura to submit the paper to GENETICS, where Crow was an editor (the paper was later effusively and uncharacteristically praised by its reviewer, Wright).


Always an Eccentric? A Brief Biography of Mootoo Kimura: 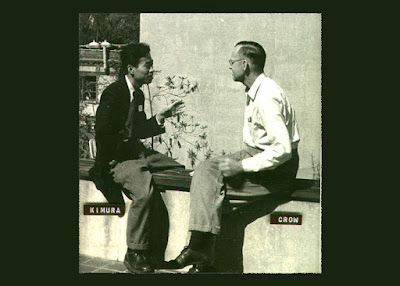