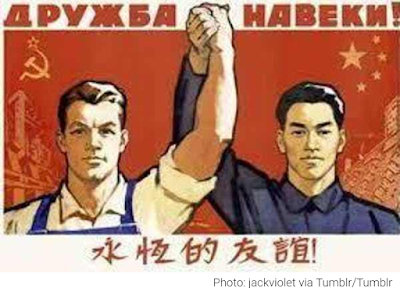 Overly aggressive US foreign and economic policies toward Russia and China are pushing the two into a tighter relationship. US rapprochement with China, exploiting Sino-Soviet tensions, was an important achievement of Nixon and Kissinger in the previous Cold War. Today a solidified Russia-China bloc is an extremely negative development for US interests.

There are important synergies between the two countries. Russia still leads in key military technologies, and can supply China with badly needed natural resources.  China has a more vibrant economy and is starting to surge into global leadership across a range of technologies and in manufacturing.

The main source of potential conflict between the two is the sparsely populated, but resource rich, Russian Far East. I doubt territorial ambitions there are a top priority for China, especially if an amicable trading relationship can be established for oil, gas, and other resources. Chinese economic influence in the region is growing, threatening to overwhelm the Russians. But the trajectory is manageable if both sides agree to cooperate.

The article excerpted below is by Bruno Maçães, a former Europe minister for Portugal, and author of The Dawn of Eurasia (Penguin 2018).


Politico (EU): ... In the halls of the Kremlin these days, it’s all about China — and whether or not Moscow can convince Beijing to form an alliance against the West.

Russia’s obsession with a potential alliance with China was already obvious at the Valdai Discussion Club, an annual gathering of Russia’s biggest foreign policy minds, in 2017.

At their next meeting, late last year, the idea seemed to move from the speculative to something Russia wants to realize. And soon.

... Every Russian speech — from obscure academics to Foreign Minister Sergei Lavrov and Russian President Vladimir Putin himself — played that note and no other. There was even a new sense of desperation in the air.

As Sergey Karaganov, a former adviser to Putin, explained to me at breakfast, now everything must be about China.

... There was no doubt at Valdai that China knows how to do economic growth, and that Russia does not. Russia’s elite — always so ready to resist any sign of Western hegemony — have no problem admitting China’s economic superiority. Their acceptance reminded me of the way Britain gave way to the United States as the world’s dominant economic power.

... In the past, the possibility of an alliance between the two countries had been hampered by China’s reluctance to jeopardize its relations with the U.S. But now that it has already become a target, perhaps it will grow bolder. Every speaker at Valdai tried to push China in that direction.

When Putin finished a fireside chat with policymakers — a set-piece of the conference, where he fields softball questions from the audience — he made a gesture to leave the room, but then quickly rushed back to grab Yang Jiechi, a former Chinese foreign minister and arguably the main architect of the country’s foreign policy. He insisted on walking out with Yang by his side, to the obvious delight of his Chinese guest.

... I met Karaganov again at a meeting with Chinese officials and think tankers in Beijing a few weeks ago. There, a number of Chinese participants said they doubted Russia’s assertions that the world is in the midst of a new Cold War.

Karaganov dedicated himself to convincing them otherwise, arguing with increasing passion that China is deluding itself if it thinks issues between Beijing and Washington can be conveniently resolved to the benefit of both sides.

If Beijing places its bets on peace and cooperation, the great Chinese adventure will come to an end, and China will have to live in the shadow of the U.S. for another generation — perhaps forever, Karaganov said. Chinese authorities, he argued, have no more than five years to make a decision.

The meeting was held under the Chatham House rule, so unfortunately, I cannot report on what the response from the Chinese side was; only Karaganov allowed me to relay his words.

... from my own separate conversations, Chinese officials appear to agree the clock is ticking. They’re just not yet convinced they should choose war — even a Cold War. 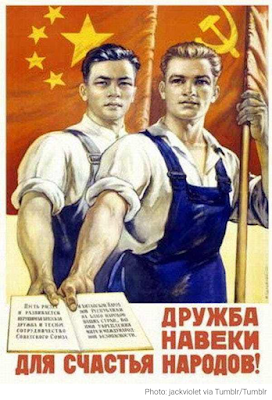