Precision Genomic Medicine and the UK

I just returned from the UK, where I attended a Ditchley Foundation Conference on machine learning and genetic engineering. The attendees included scientists, government officials, venture capitalists, ethicists, and medical professionals.

The UK could become the world leader in genomic research by combining population-level genotyping with NHS health records. The application of AI to datasets of this kind has already led to the creation of genomic predictors that can identify individuals at high risk for common disease conditions such as breast cancer, heart disease, diabetes, hypothyroidism, etc. Such breakthroughs provide insight into the genetics of disease, and allow more efficient allocation of resources for prevention and early detection to the individuals who would most benefit. This saves both lives and money.

The US private health insurance system produces the wrong incentives for this kind of innovation: payers are reluctant to fund prevention or early treatment because it is unclear who will capture the ROI. Consider a cost-effective intervention that, e.g., prevents a patient from developing diabetes. This produces an obvious health benefit, but if the patient later changes insurer the financial benefits are lost to the one that paid for the intervention. Not a problem, though, in a single-payer system.

The NHS has the right incentives, the necessary scale, and access to a deep pool of scientific talent. The UK can lead the world into a new era of precision genomic medicine.

NHS has already announced an out-of-pocket genotyping service which allows individuals to pay for their own genotyping and to contribute their health + DNA data to scientific research. In recent years NHS has built an impressive infrastructure for whole genome sequencing (cost ~$1k per individual) that is used to treat cancer and diagnose rare genetic diseases. The NHS subsidiary Genomics England recently announced they had reached the milestone of 100k whole genomes.

For common conditions such as heart disease, diabetes, breast cancer, etc., most of the recent advances in risk prediction have come from even larger datasets (many hundreds of thousands of individuals) with genotypes from inexpensive arrays (~$50; like those used by 23andMe) that sample the genome at the roughly million or so most informative locations. By contrast, a whole genome sequence measures all 3 billion base pairs. This provides more raw data per individual, but we do not currently know how to use most of that information.

At the meeting, I emphasized the following:

1. NHS should offer both inexpensive (~$50) genotyping (sufficient for risk prediction of common diseases) along with the more expensive $1k whole genome sequencing. This will alleviate some of the negative reaction concerning a "two-tier" NHS, as many more people can afford the former.

2. An in-depth analysis of cost-benefit for population wide inexpensive genotyping would likely show a large net cost savings: the risk predictors are good enough already to guide early interventions that save lives and money. Recognition of this net benefit would allow NHS to replace the $50 out-of-pocket cost with free standard of care.

Slides I presented at Ditchley.

A 10 minute video covering the slides. 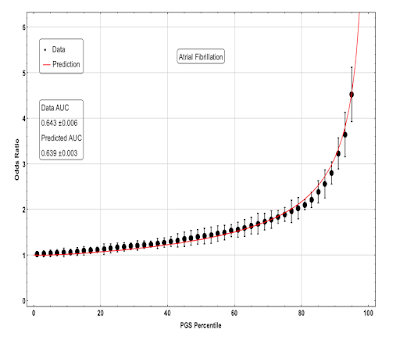