Techno-pessimists should note that detecting gravity waves is much, much harder than landing on the moon. LIGO measured a displacement 1/1000 of a neutron radius, in a noisy terrestrial background, accounting even for quantum noise.

When I was an undergraduate, I toured the early LIGO prototype, which was using little car shaped rubber erasers as shock absorbers. Technology has improved since then, and the real device is much bigger.

As Kip makes clear in his talk, the detection of gravity waves was a ~50 year project involving large numbers of very smart physicists and engineers, with the sustained support of some of the most impressive scientific institutions in the world (Caltech, MIT, NSF, Moscow State University). Entirely new technologies and areas of theoretical and experimental physics had to be developed to bring this dream to fruition.

I learned general relativity from Kip when I was at Caltech. The photo below was taken in Eugene, Oregon. Physics as a Strange Attractor. 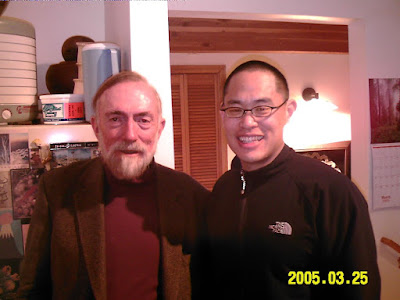