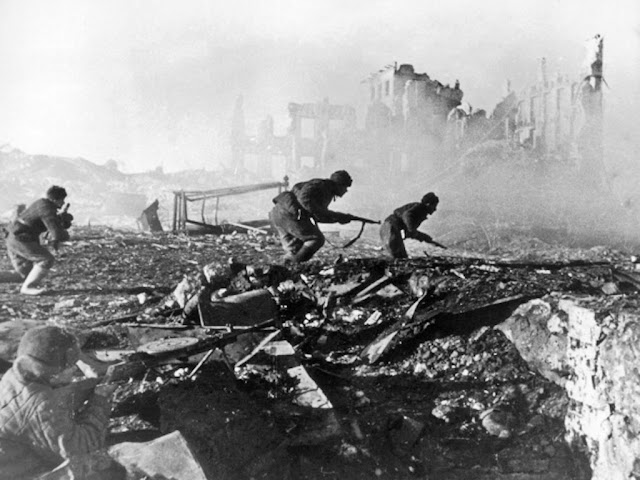 
LA Review of Books: ... The archive was compiled by a historical commission headed by a Moscow professor, Isaak Mints. Members of the commission were allowed into Stalingrad in late December 1942 — this was more than a month before the battle would end, and there was bitter fighting going on in the city. Over the next weeks they conducted more than 200 interviews with soldiers and other eyewitnesses. These first-person accounts were so frank and multifaceted that they couldn’t be published at the time. They were locked away, but not destroyed.

I found them quite by chance. Several Russian colleagues who knew about my interest in first-person accounts told me about entire boxes filled with memoirs, somewhere in the basement of a Moscow archive. When I finally received permission to study these documents, my jaw dropped. I first assumed they were recollections of the war written in the 1960s or 1970s — but the archive was full of first-person statements delivered during the war. It shows the interviewed soldiers steeped in the events that they describe. In 1942 nobody knew when or how the Second World War would end, and the interviews show you the horizons of people at war, they bring you closer to their thoughts and emotions than any other source.

... When I began my project I initially wanted to compare the voices and emotions of German and Soviet soldiers. There are many diaries available on the German side, but hardly any from the Soviet perspective. The Red Army forbade personal diaries, and Soviet censors ensured that soldiers wrote only bland letters along the lines of, “Hello, I’m well and alive,” so that the letters couldn’t be used for intelligence or propaganda if they fell into German hands. Consequently there are few sources that present us with a full record of unmediated wartime voices.

... In the account I mentioned earlier, the otherwise unexceptional Lieutenant Averbukh fell back from his command post after it was overrun and, shot, retreated while carrying his dying unit commander:


Captain Lizunov was showing little sign of life, but I could hear him whispering, saying that I should leave him and save myself. Obviously I didn’t leave him. We crawled to Verkhnyaya Elshanka, in the area of the radio station. I sat up to get my bearings and got hit again. Submachinegun fire to the left side of my chest and my left arm. I lost consciousness. I don’t know how long I was out. I woke up because it got really cold. It was late, around four in the morning. It was already starting to get light. I could hear people speaking German all around me. I couldn’t see Lizunov anywhere. I decided to shoot myself because I didn’t have any strength left, and I didn’t want them to take me alive. I figured there was no way out. I pulled the trigger, but the Mauser was clogged with sand and wouldn’t fire. My right arm was still okay. With my right arm I crawled away and by some miracle made it to the division command post. It was already midday.


Portraits of German and Soviet Survivors

The Battle of Stalingrad was one of the most ferocious military campaigns of all time. Ending with the rout of an entire German army, it marked a turning point in World War II. “Facing Stalingrad” features portraits of German and Soviet veterans who were interviewed in their homes in 2009. The project illuminates the battle’s human dimension and juxtaposes perspectives from both sides.


... The general said nothing; they said nothing. They were afraid. They were officers. I then said: “What should we do now?” And then a staff sergeant, who could speak perfect Polish, entered at a trot. He was Polish, but a German Pole. He announced that four tanks, Russian T-34, had run over and cut the cables, that there was no longer any connection. There was nothing that could be done. One could no longer make telephone calls. They had run over the cable. We should surrender. The general then stood up. He adjusted his collar to make it neater. He was tall. He put on his cap. I stood here; he stood there. He just stood there, then he took his revolver – Long live Germany! Long live my country! – and he shot himself here and then fell forwards. I thought he would fall off the table. I stood right there. I had never seen such a thing: some white stuff came out at the top. The stuff that comes out of a herring when you cut it up. Not the bones. The white stuff. ...

Does Stalingrad appear in your dreams?

I’ve only been speaking to you for a couple of days. I can say that I sit every day in my bed – for hours. All the memories surface. Always before Christmas. Terrible. Christmas was the worst time when I was a prisoner. On Christmas Eve the Russians would come in at 10 PM. They would count us. We then had to go outside – quickly, quickly. Nearly barefoot, only wearing socks. 20, 30 degrees cold. We stood outside half-naked. Just padded jackets on. And we had to form groups of five men each. Raz, dva – always five men.

Then the Russians started counting. The commander. And then they went back to the headquarters, in the house, to booze. Then they returned after an hour. Nichevo [Russian: “no problem”]. “Have you counted?” I said: “Nope.” “Count!” Then there was a new count. We counted from 10 PM, 11 PM till 2, 3 AM. The sentries stood outside with carbines. Then one man fell over due to the cold. Another man fell over… 10, 12 men, 16 men, the number varied, fell over. They had to be placed in front. So that they could also be counted. Oh, zavtra [Russian: “tomorrow”] it’s all over. Tomorrow morning he’ll be dead. We went indoors and they remained lying on the ground. They weren’t allowed to be brought indoors. In the morning they were frozen stiff – broken. Zavtra utrom – tomorrow morning it’ll be all over with them. Posmotri! [Russian:“Look!”] Look up, that’s where God is, He’s seen that and you bandits will go to hell.

I was invited several times to Stalingrad. It’s definitive – I’ll never go there again. I’d rather walk with a dead man.