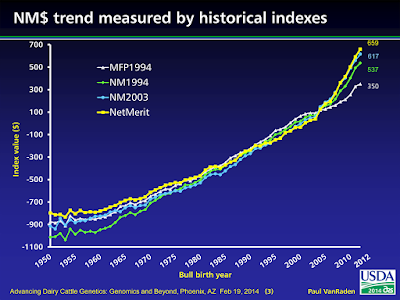 This figure and the excerpt below come from the genomics column of The Bullvine, a publication aimed at dairy breeders (via Carl Shulman). In the highly-developed world of genomic cattle breeding, it has been speculated that the theoretical "maximal type" bull could have ten times the merit (defined in terms of increased earnings of its progeny, see below) of the top breeding bulls that exist today. Sound familiar? See This is for PZ Myers for related discussion concerning human cognition.

While the "maximal type" may never be achieved, it is interesting that each new top sire surpasses the previous record holder, and previous generations, by a substantial margin. In the human context, this would correspond to a steady stream of individuals, each of greater ability, all of whom surpass the greatest historical geniuses.

During the recent “Advancing Dairy Cattle Genetics: Genomics and Beyond”, Paul VanRaden with USDA’s Animal Improvement Programs Laboratory pointed out that “If we took the best haplotypes (genes) from all the cows genomic tested to date, we would have a cow at $7515 Net Merit”. That’s pretty spectacular considering the current top Sire on the $NM list is DE VOLMER DG SUPERSHOT at 1000 $NM.

Now to put that into perspective the current rate of gain is $80 per year. So in order to breed that $7515 animal it would take us 81 years to actually breed that animal. Therefore it raises the question whether such an animal is actually achievable and is there technology out there that could accelerate the process of getting that Super Cow.

The interesting fact here is the greatly accelerated rate of genetic gain since the introduction of genomics. This results for the most part from the greatly shortened generation interval. Females are now being used as bull mothers 18 months sooner than in the past (as yearlings vs mid 1st lactation), and sires of sons are now being used 24 and sometime 36 months sooner than they were in the past. (Genomic indexes vs waiting for proven sires). The almost 40% increase in reliability of estimated transmitting ability has breeders and AI companies contracting and working with these elite animals at a significantly younger age. ...

See also this post from 2012: Genomic prediction: no bull

The Atlantic: ... Data-driven predictions are responsible for a massive transformation of America's dairy cows. While other industries are just catching on to this whole "big data" thing, the animal sciences -- and dairy breeding in particular -- have been using large amounts of data since long before VanRaden was calculating the outsized genetic impact of the most sought-after bulls with a pencil and paper in the 1980s. Dairy breeding is perfect for quantitative analysis. Pedigree records have been assiduously kept; relatively easy artificial insemination has helped centralized genetic information in a small number of key bulls since the 1960s; there are a relatively small and easily measurable number of traits -- milk production, fat in the milk, protein in the milk, longevity, udder quality -- that breeders want to optimize; each cow works for three or four years, which means that farmers invest thousands of dollars into each animal, so it's worth it to get the best semen money can buy. The economics push breeders to use the genetics.

The bull market (heh) can be reduced to one key statistic, lifetime net merit, though there are many nuances that the single number cannot capture. Net merit denotes the likely additive value of a bull's genetics. The number is actually denominated in dollars because it is an estimate of how much a bull's genetic material will likely improve the revenue from a given cow. A very complicated equation weights all of the factors that go into dairy breeding and -- voila -- you come out with this single number. For example, a bull that could help a cow make an extra 1000 pounds of milk over her lifetime only gets an increase of $1 in net merit while a bull who will help that same cow produce a pound more protein will get $3.41 more in net merit. An increase of a single month of predicted productive life yields $35 more. When you add it all up, Badger-Fluff Fanny Freddie has a net merit of $792. No other proven sire ranks above $750 and only seven bulls in the country rank above $700.

... theoretical calculations suggest that even outliers with net merit of $700-800 will be eclipsed by specimens with 10x higher merit that can be produced by further selection on existing genetic variation. Similar results apply to humans. ...