Can't we all just get along? Albion's Seed reviewed on Slate Star Codex

Highly recommended! Scott Alexander reviews and summarizes Albion's Seed. The copy I read years ago belonged to the university library. Scott mentions so many interesting topics I had forgotten that I just now got a personal copy of the book.


Slate Star Codex: Albion’s Seed by David Fischer is a history professor’s nine-hundred-page treatise on patterns of early immigration to the Eastern United States. It’s not light reading and not the sort of thing I would normally pick up. I read it anyway on the advice of people who kept telling me it explains everything about America. And it sort of does.

In school, we tend to think of the original American colonists as “Englishmen”, a maximally non-diverse group who form the background for all of the diversity and ethnic conflict to come later. Fischer’s thesis is the opposite. Different parts of the country were settled by very different groups of Englishmen with different regional backgrounds, religions, social classes, and philosophies. The colonization process essentially extracted a single stratum of English society, isolated it from all the others, and then plunked it down on its own somewhere in the Eastern US. ...

... If America is best explained as a Puritan-Quaker culture locked in a death-match with a Cavalier-Borderer culture, with all of the appeals to freedom and equality and order and justice being just so many epiphenomena – well, I’m not sure what to do with that information. Push it under the rug? Say “Well, my culture is better, so I intend to do as good a job dominating yours as possible?” Agree that We Are Very Different Yet In The End All The Same And So Must Seek Common Ground? Start researching genetic engineering? Maybe secede? I’m not a Trump fan much more than I’m an Osama bin Laden fan; if somehow Osama ended up being elected President, should I start thinking “Maybe that time we made a country that was 49% people like me and 51% members of the Taliban – maybe that was a bad idea“.

I don’t know. But I highly recommend Albion’s Seed as an entertaining and enlightening work of historical scholarship which will be absolutely delightful if you don’t fret too much over all of the existential questions it raises. 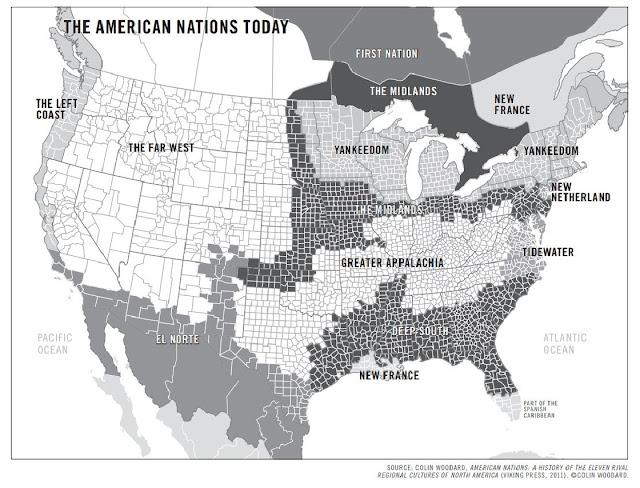