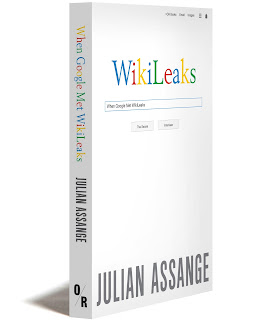 
Google is not what it seems: ... The stated reason for the visit was a book. Schmidt was penning a treatise with Jared Cohen, the director of Google Ideas, an outfit that describes itself as Google’s in-house “think/do tank.” I knew little else about Cohen at the time. In fact, Cohen had moved to Google from the US State Department in 2010. He had been a fast-talking “Generation Y” ideas man at State under two US administrations, a courtier from the world of policy think tanks and institutes, poached in his early twenties. He became a senior advisor for Secretaries of State Rice and Clinton. At State, on the Policy Planning Staff, Cohen was soon christened “Condi’s party-starter,” channeling buzzwords from Silicon Valley into US policy circles and producing delightful rhetorical concoctions such as “Public Diplomacy 2.0.”

... Schmidt was a good foil. A late-fiftysomething, squint-eyed behind owlish spectacles, managerially dressed—Schmidt’s dour appearance concealed a machinelike analyticity. His questions often skipped to the heart of the matter, betraying a powerful nonverbal structural intelligence. It was the same intellect that had abstracted software-engineering principles to scale Google into a megacorp, ensuring that the corporate infrastructure always met the rate of growth. This was a person who understood how to build and maintain systems: systems of information and systems of people. My world was new to him, but it was also a world of unfolding human processes, scale, and information flows.

For a man of systematic intelligence, Schmidt’s politics—such as I could hear from our discussion—were surprisingly conventional, even banal. He grasped structural relationships quickly, but struggled to verbalize many of them, often shoehorning geopolitical subtleties into Silicon Valley marketese or the ossified State Department microlanguage of his companions.9 He was at his best when he was speaking (perhaps without realizing it) as an engineer, breaking down complexities into their orthogonal components.

I found Cohen a good listener, but a less interesting thinker, possessed of that relentless conviviality that routinely afflicts career generalists and Rhodes scholars. As you would expect from his foreign-policy background, Cohen had a knowledge of international flash points and conflicts and moved rapidly between them, detailing different scenarios to test my assertions. But it sometimes felt as if he was riffing on orthodoxies in a way that was designed to impress his former colleagues in official Washington. ...

See Creators and Rulers and this earlier Assange post, specifically reference to his early pursuit of theoretical physics and thoughts on high cognitive ability. He registered the domain IQ.org for his (now defunct) blog, and cites psychologist Leta Hollingworth in his 23 Sept 2006 post:


IQ.org: ... Observation shows that there is a direct ratio between the intelligence of the leader and that of the led. To be a leader of his contemporaries a child must be more intelligent but not too much more intelligent than those to be led... But generally speaking, a leadership pattern will not form--or it will break up--when a discrepancy of more than about 30 points of IQ comes to exist between leader and led ...

The figure below displays the math, verbal and spatial scores of gifted children tested at age 12, and their eventual college majors and career choices. This group is cohort 2 of the SMPY/SVPY study: each child scored better than 99.5 percentile on at least one of the M-V sections of the SAT.

Scores are normalized in units of SDs. The vertical axis is V, the horizontal axis is M, and the length of the arrow reflects spatial ability: pointing to the right means above the group average, to the left means below average; note the arrow for business majors should be twice as long as indicated but there was not enough space on the diagram. The spatial score is obviously correlated with the M score.