Standard deviations around the world

In an earlier post I investigated the variance (standard deviation) in IQ by country using PISA scores. Looking for additional data, I came across this paper by Rindermann et al., which investigates smart and dumb fraction effects by country. It obtains some interesting results using an IQ estimate computed from PISA, TIMSS and PIRLS scores. I doubt you can do much better than these numbers for country-level estimates. Below is an excerpt from one of his tables; CA = cognitive ability, first column of numbers is the mean, second is the 5th percentile, third is the 95th percentile. As far as I can tell, wealthy, ethnically homogeneous countries have a spread of about 40 points (plus or minus a few points) between 5th and 95th percentile. While there is significant variation in means, the SD seems to vary by only a point or so. You can find countries with larger SD, but I suspect this is because of the amalgamation of sub-populations of different means.

Note: 5th to 95th percentile is about 3.3 SD. For some strange reason the SD in developed, homogeneous countries (e.g., Japan, Korea, Norway, Netherlands, etc.) is roughly 12 plus or minus about one in Rindermann's results, not 15. They claim they normalize the educational achievement scores to a "Greenwich (=UK?) mean IQ" of 100 with SD 15, but the SD for their UK entry is about 14, unless I made an arithmetic error. 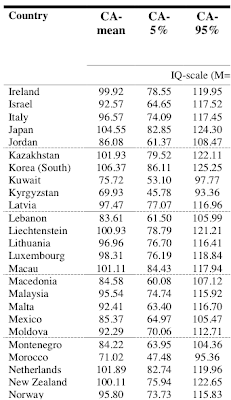 Rindermann, in an earlier paper titled The g‐factor of international cognitive ability comparisons: the homogeneity of results in PISA, TIMSS, PIRLS and IQ‐tests across nations, showed that country IQ estimates of Lynn and Vanhanen were consistent with the educational performance data, and that a country level "G" factor explains most of the variation. The Rindermann link above goes to a 120 page pdf that contains Rindermann's paper and lots of commentary from leading intelligence researchers. Apparently his straightforward compilation of data had a big impact in that community ;-)

[See here for scatterplots of L-V estimates of national IQ vs tests of educational achievement.]

I believe this contains an argument for a higher spread in the Asian populations. The assumption that the European countries can be modeled as ethnically homogenous is questionable, there is probably much greater homogeneity in (some of) the Asian cohorts.

To use Norway as an example (since it is cited above as an example of a homogenous country), they're officially already at 12.2% immigrant population. This is low for a Scandi nation, yet far above the typical Asian equivalent. Yet even this is a strong underestimation of immigrant (in a genetic sense) population. For political reasons, the Scandinavian governments have made it difficult to estimate the proportion of population which is of non-native genetic background, and children of such are not designated as "immigrant" children statistically. But in Southern Norway - including the capitol, Oslo - the most common baby name (by far...) is currently Mohammad, and some estimates of (genetically) non-native population are above 20% for Norway. Almost none of these children are "immigrants" according to government designation, but these children will presumably contribute to both mean and spread in the same way as FOBs.

Compare this to the Asian cohorts. Japan is an Asian equivalent of Norway - but with <2% immigrants (and immigrants to Japan with much higher AC than immigrants to Norway... they will not affect IQ scores as much), and minority populations at ca. 2%. Yet their spread is also ca. 20!