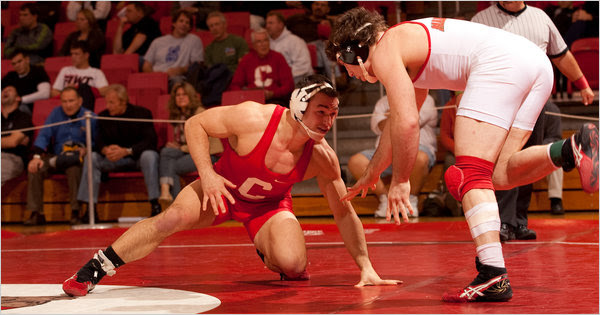 Title IX is killing a lot of non-revenue men's college sports, like swimming, gymnastics and wrestling. Oregon, which produced a number of NCAA individual champions (and UFC fighter Chael Sonnen), eliminated its wrestling program a few years ago.

An indication of the overall weakness of collegiate wrestling programs is that Cornell is the preseason #1 ranked team this year!

NYTimes: ... every N.C.A.A. wrestling championship since 1989 has been won by teams from Iowa, Oklahoma or Minnesota — with only 4 of 80 N.C.A.A. championships won from outside those states in history — this season, Cornell is the unanimous preseason No. 1.

It is the first time a team from the Ivy League, which prohibits athletic scholarships, has had the top ranking in wrestling and is one of the rare times an Ivy team has been ranked No. 1 outside sports like lacrosse, fencing, squash, and ice or field hockey.

But Cornell is carrying a flag for more than the Ivys. Cornell, which finished second to Iowa in last season’s N.C.A.A. championships, is seeking to become just the second Eastern-based team to win the national wrestling title. Penn State won it in 1953.

I grew up in Iowa, a wrestling hotbed. Both Dan Gable and Cael Sanderson, perhaps the greatest American wrestlers of all time, competed for Iowa State University, in my hometown. I never competed in wrestling, but I remember learning the techniques in gym class and on the playground. In HS it seemed like at every keg party you had to be ready to grapple because some drunk wrestler might grab you and want to roll around on the living room floor or in the back yard! Guys in other sports would try to get out of it by calling the wrestlers gay ("get off me, you homo!"), but in reality they (even football players) wanted nothing to do with close contact with a wrestler. (Note there are no wrestlers in this picture, although wimpier Ivy sports like swimming, cross country and tennis are well represented ;-)

The last actual fight I had (a long time ago!) was with a kid who went on to wrestle for ISU! It started with me hitting a single leg on him and tossing him into a locker. Then we hit each other in the face for what seemed like a long time before a teacher broke it up. One thing I learned from the fight is that two untrained guys can trade shots to the head for a long time before anyone goes down (this is also evident from early UFC fights). I was initially reluctant to hit the other kid in the face (I had never really had to do it before), but he showed no similar reluctance :-)

I did do Judo as a kid (my parents wouldn't let me do Karate or Tae Kwon Do) and later competed in both Judo and BJJ as an adult. I noticed that my Iowa background meant I could usually wrestle better than anyone who hadn't actually competed in wrestling (i.e., at a high school level or higher). If I wanted to get any judoka or jiujitsu player to the ground I could pretty much do it. Judokas would always complain that I was using leg attacks and not nice nagewaza (upper body throws), but this is basically just a convention and wrestling takedowns are all legal in Judo. In any first randori with another judoka I could always get a takedown by faking coming to grips and instead shooting for a leg.

I sometimes worked out at the ISU weight room in Beyer Hall, where the wrestlers trained. The summer between my junior and senior year of HS my schedule (I think determined by some math class I was taking) coincided with that of 1981 World Champion Chris Campbell, an ISU assistant coach. One of my wrestler friends had an amazing poster of Campbell hitting a souffle (suplex) on a Russian en route to winning his world title. Campbell and the Russian are both flying through the air and only the tip of Campbell's toe is touching the mat. He was by far the most amazing physical specimen I had seen at that point in my life. Campbell usually ran in the sweltering heat before lifting weights. He would warm up by doing hyperextensions with a 45 pound plate behind his head. You can see his exceptional lower back musculature in this video (yes, that bulge is his erector spinae), showing him competing in the 1992 Olympics at age 37 (he won the bronze -- see picture below)! But he was much more impressive as a younger man in the early 1980s. Unlike a lot of the Iowa kids, who had wrestling rooms in their basements and competed in tournaments while still in grade school, Campbell started wrestling fairly late. But his physical powers were such that he reached the highest levels of the sport. Somehow it was obvious to me even then that no matter how hard I trained I would never have strength, stamina or quickness like his. 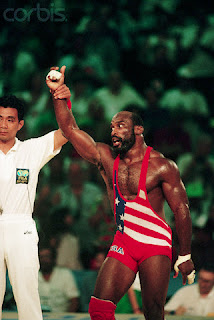 I know that it wasn't the main point of the post, but you did lead with the conventional wisdom that Title IX is killing small non-revenue men's sports. I would argue that it's not Title IX itself that is to blame, but its conjunction with big-time college football. The point about football is that (1) there are no women's football teams, and (2) football teams -- at least at big football powers -- are huge compared to other college sports. Any school willing to give up, or even reduce the size of, its football team would have no trouble accommodating more small men's sports.

To first approximation ALL revenue that college athletic programs receive comes from college football. If it weren't for football (and in a few cases, basketball), every athletic program would run deep in the red.

Given the massive public enthusiasm for college football (and the lack of any female counterpart), I think it should be exempted from title IX accounting. It just exists on another plane from other college sports.

By which Steve means: DO that AGAIN!. YUM! Why do you think he travels so much?