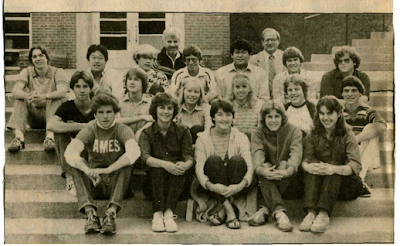 The picture above was taken in the early 80s (see earlier discussion here). Does it look more 70s or 80s to you? Our cohort grew up in between those decades, a bit later than Dazed and Confused, but, it seems to me, before the John Hughes era (e.g., Sixteen Candles, Breakfast Club, which I watched in college). At the time, I thought the most perfectly realized high school movie was Risky Business, which came out my senior year, and made Tom Cruise a star. His character, Joel Goodson, is obsessed with getting into Princeton.

Here are two songs from the period which always make me think of my first girlfriend. I don't think I've ever told her that! Our family had (for odd reasons) two old convertible Fiat Spyders. We lived out in the country, and my brother and I would often put the top down even in the winter, to better enjoy the night sky as the city lights faded to black.

Suckin on chilli dogs outside the tastee freeze
Diane sittin on jackies lap
Got his hands between her knees
Jackie say, hey diane lets run off
Behind shade tree
Dribble off those bobby brooks
Let me do what I please