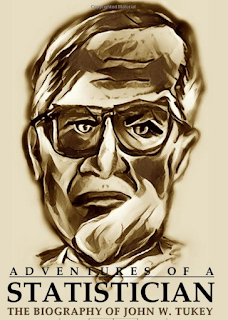 I received this message over the weekend.

With great interest I regularly read your excellent Information Processing Blog. With regard to your assessment of Dom Cummings' achievements I am at variance with yours. But I guess you will like the anecdote referring to Feynman.

I am a retired psychology prof from University of Mannheim, Germany specializing in intelligence research, research methodology, assessment and evaluation research.

If you want to learn more about what kind of difference differences in IQ make read the research of Dave Lubinski and Camilla Benbow what differences highly gifted youngsters accomplish after several decades. Dave makes their publications available at https://my.vanderbilt.edu/smpy/publications/david-lubinski/

Physicists are among the smartest high IQ people, there is no doubt. If you want a single case example take Richard Feynman. If we could have lured him to psychology an important concept probably would have been published 35 years earlier.

In 1939 Feynman as a graduate student at Princeton experimented just for fun together with his friend John Tukey (who later became the famous statistician) to assess the ability of measuring time by counting.(Gleick,1992) They run stairs up and down to accelerate their heartbeats and trained themselves at the same time to count seconds and steps. Feynman’s performance deteriorated when he talked but not when he read. Tukey instead performed well when he recited poems aloud and worse when he read. So both have detected what is now known as the two slave systems of working memory, namely the phonological loop and the visuo-spatial sketchpad. Now you get a feeling how much more psychology would have been advanced if brains like theirs had been invested in my discipline at that time.

As a true and convinced European I am really sorry that the English left us, the Scots and the Northern-Irish didn’t want it and maybe one day the fame of tearing the United Kingdom into parts goes to Cummings as well?

What I would say to Cummings:

But he did it and now…

Boris Johnson probably to Cummings: “The moor has pled guilty the moor can go” ?


From Wikipedia about Working Memory

In 1974, Baddeley and Hitch[11] introduced the multicomponent model of working memory. The theory proposed a model containing three components: the central executive, the phonological loop, and the visuospatial sketchpad with the central executive functioning as a control center of sorts, directing info between the phonological and visuospatial components.[12] The central executive is responsible inter alia for directing attention to relevant information, suppressing irrelevant information and inappropriate actions, and coordinating cognitive processes when more than one task is simultaneously performed. A "central executive" is responsible for supervising the integration of information and for coordinating "slave systems" that are responsible for the short-term maintenance of information. One slave system, the phonological loop (PL), stores phonological information (that is, the sound of language) and prevents its decay by continuously refreshing it in a rehearsal loop. It can, for example, maintain a seven-digit telephone number for as long as one repeats the number to oneself again and again.[13] The other slave system, the visuospatial sketchpad, stores visual and spatial information. It can be used, for example, for constructing and manipulating visual images and for representing mental maps. The sketchpad can be further broken down into a visual subsystem (dealing with such phenomena as shape, colour, and texture), and a spatial subsystem (dealing with location).


Re: Brexit, see these remarks from Now it can be told: Dominic Cummings and the Conservative victory 2019


I don't know enough to have a high confidence or high conviction opinion concerning Brexit. Intelligent and thoughtful people disagree strongly over whether it is a good idea or a potential disaster.

Nevertheless, I can admire Dom's effectiveness as a political strategist and chief advisor to the Prime Minister. I do know him well enough to state with high confidence that his intentions are idealistic, not selfish, and that he (someone who has spent decades thinking about UK government, foreign policy, relations with Europe) sincerely thinks Brexit is in the best interests of the British people. Dom has deeper insights and better intuition about these issues than I do!

Being a rationalist, Dom has pointed out on his own blog that it is impossible to know with high confidence what the future implications of most political decisions are... In that sphere one cannot avoid decision making under extreme uncertainty.

The epistemically careful may end up like Zhou Enlai. When asked about consequences of the French Revolution, the late premier is reported to have said: Too early to tell. Be prepared to find that thoughtful people, pressed for an opinion, can disagree...
Posted by Steve Hsu at 5:15 PM