...The encouragement that the fifty-five-year-old psychology professor offers to his audiences takes the form of a challenge. To “take on the heaviest burden that you can bear.” To pursue a “voluntary confrontation with the tragedy and malevolence of being.” To seek a strenuous life spent “at the boundary between chaos and order.” Who dares speak of such things without nervous, self-protective irony? Without snickering self-effacement?

“It’s so sad,” he says. “Every time I go to these talks, guys come up and say, ‘Wow, you know, it’s working.’ And I think, Well, yeah. No kidding! Nobody ever fucking told you that.”

"...When he says, ‘Life is suffering,’ that resonates very deeply. You can tell he’s not bullshitting us."

This is a profile of a guy I happen to have met recently at a fancy event (thx for cigars, Mike!), but it's also a reflection on the evolution (or not) of finance over the last few decades.

... And yet the majority of the hedge funders I befriended were not living happier or more interesting lives than my friends who had been exiled from the city. They had devoted their intellects and energies to winning a game that seemed only to diminish the players. One book I was often told to read was “Reminiscences of a Stock Operator,” first published in 1923. Written by Edwin Lefèvre, the novel follows a stockbroker named Lawrence Livingston, widely believed to be based on Jesse Livermore, a colorful speculator who rose from the era of street-corner bucket shops. I was astounded by how little had changed between the days of ticker tape and our own world of derivatives and flash trading, but a facet that none of the book’s Wall Street fans had mentioned was the miserableness of its protagonist. Livingston dreams of fishing off the Florida coast, preferably in his new yacht, but he keeps tacking back up to New York for one more trade. “Trading is addictive,” Novogratz told me at the Princeton reunion. “All these guys get addicted.” Livermore fatally shot himself in New York’s Sherry-Netherland Hotel in 1940.

... Novogratz had described another idea to me, one several magnitudes more audacious—certainly more institutional, and potentially more durable—than a mere half-a-billion-dollar hedge fund. He wanted to launch a publicly traded merchant bank solely for cryptocurrencies, which, with characteristic immodesty, he described as “the Goldman Sachs of crypto,” and was calling Galaxy Digital. “I’m either going to look like a genius or an idiot,” he said.

... On the day we met at his apartment, a regulatory crackdown in China, preceded by one announced in South Korea, was pushing the price of bitcoin down. (It hasn’t returned to its December high, and is currently priced at around seven thousand dollars.) Meanwhile, it appeared that hedge funds, many of which had ended 2016 either ailing or dead, were reporting their best returns in years. After six years of exploring finance, I concluded that, despite the expertise and the intelligence on display, nobody really knows anything. “In two years, this will be a big business,” Novogratz said, of Galaxy Digital. “Or it won’t be.”

Here I am with an espresso, waiting for a meeting with Mike at Galaxy Digital. 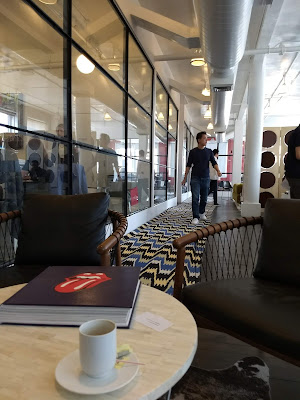