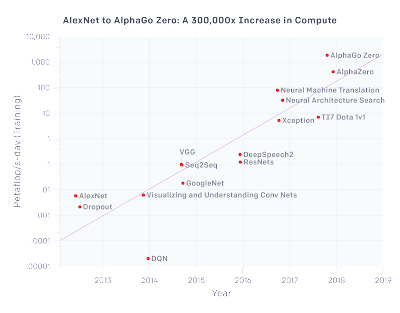 Chart shows the total amount of compute, in petaflop/s-days, used in training (e.g., optimizing an objective function in a high dimensional space). This exponential trend is likely to continue for some time -- leading to qualitative advances in machine intelligence.


AI and Compute (OpenAI blog): ... since 2012, the amount of compute used in the largest AI training runs has been increasing exponentially with a 3.5 month-doubling time (by comparison, Moore’s Law had an 18-month doubling period). Since 2012, this metric has grown by more than 300,000x (an 18-month doubling period would yield only a 12x increase). Improvements in compute have been a key component of AI progress, so as long as this trend continues, it’s worth preparing for the implications of systems far outside today’s capabilities.

... Three factors drive the advance of AI: algorithmic innovation, data (which can be either supervised data or interactive environments), and the amount of compute available for training. Algorithmic innovation and data are difficult to track, but compute is unusually quantifiable, providing an opportunity to measure one input to AI progress. Of course, the use of massive compute sometimes just exposes the shortcomings of our current algorithms. But at least within many current domains, more compute seems to lead predictably to better performance, and is often complementary to algorithmic advances.

...We see multiple reasons to believe that the trend in the graph could continue. Many hardware startups are developing AI-specific chips, some of which claim they will achieve a substantial increase in FLOPS/Watt (which is correlated to FLOPS/$) over the next 1-2 years. ...