Once something has become widely understood, it is difficult to recreate or fully grasp the mindset that prevailed before. But I can attest to the fact that until the 1990s and the advent of MMA, even "experts" (like boxing coaches, karate and kung fu instructors, Navy SEALs) did not know how to fight -- they were deeply confused as to which techniques were most effective in unarmed combat.

Soon our ability to predict heritable outcomes using DNA alone (i.e., Genomic Prediction) will be well-established. Future generations will have difficulty understanding the mindset of people (even, scientists) today who deny that it is possible.

The same will be true of AGI... For example, see the well-known "Chinese Room" argument against AGI, advanced by Berkeley Philosopher John Searle (discussed before in The Mechanical Turk and Searle's Chinese Room). Searle's confusion as to where, exactly, the understanding resides inside a complex computation seems silly to us today given recent developments with deep neural nets and, e.g., machine translation (the very problem used in his thought experiment). Understanding doesn't exist in any sub-portion of the network, it is embodied in the network. (See also Thought vectors and the dimensionality of the space of concepts :-)


Effective action #4a: ‘Expertise’ from fighting and physics to economics, politics and government

In the 1980s and early 1990s, there was an interesting case study in how useful new knowledge jumped from a tiny isolated group to the general population with big effects on performance in a community. Expertise in Brazilian jiu-jitsu was taken from Brazil to southern California by the Gracie family. There were many sceptics but they vanished rapidly because the Gracies were empiricists. They issued ‘the Gracie challenge’.

All sorts of tough guys, trained in all sorts of ways, were invited to come to their garage/academy in Los Angeles to fight one of the Gracies or their trainees. Very quickly it became obvious that the Gracie training system was revolutionary and they were real experts because they always won. There was very fast and clear feedback on predictions. Gracie jiujitsu quickly jumped from an LA garage to TV. At the televised UFC 1 event in 1993 Royce Gracie defeated everyone and a multi-billion dollar business was born.

People could see how training in this new skill could transform performance. Unarmed combat changed across the world. Disciplines other than jiu jitsu have had to make a choice: either isolate themselves and not compete with jiu jitsu or learn from it. If interested watch the first twenty minutes of this documentary (via professor Steve Hsu, physicist, amateur jiu jitsu practitioner, and predictive genomics expert).

... The faster the feedback cycle, the more likely you are to develop a qualitative improvement in speed that destroys an opponent’s decision-making cycle. If you can reorient yourself faster to the ever-changing environment than your opponent, then you operate inside their ‘OODA loop’ (Observe-Orient-Decide-Act) and the opponent’s performance can quickly degrade and collapse.

This lesson is vital in politics. You can read it in Sun Tzu and see it with Alexander the Great. Everybody can read such lessons and most people will nod along. But it is very hard to apply because most political/government organisations are programmed by their incentives to prioritise seniority, process and prestige over high performance and this slows and degrades decisions. Most organisations don’t do it. Further, political organisations tend to make too slowly those decisions that should be fast and too quickly those decisions that should be slow — they are simultaneously both too sluggish and too impetuous, which closes off favourable branching histories of the future.

See also Kosen Judo and the origins of MMA. 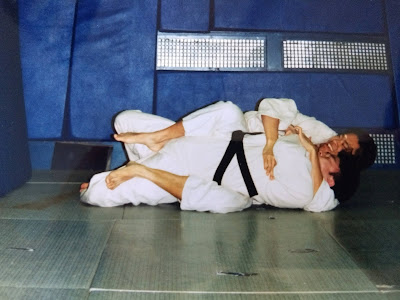 Choking out a Judo black belt in the tatami room at the Payne Whitney gymnasium at Yale. My favorite gi choke is Okuri eri jime. 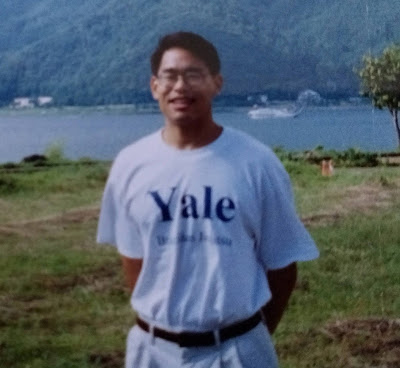 Training in Hawaii at Relson Gracie's and Enson Inoue's schools. The shirt says Yale Brazilian Jiujitsu -- a club I founded. I was also the faculty advisor to the already existing Judo Club :-)
Posted by Steve Hsu at 8:21 AM