AGI in the Alps: Schmidhuber in Bloomberg 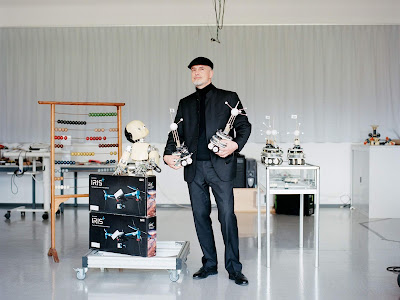 A nice profile of AI researcher Jurgen Schmidhuber in Bloomberg. I first met Schmidhuber at SciFoo some years ago. See also Deep Learning in Nature.


Bloomberg: ... Schmidhuber’s dreams of an AGI began in Bavaria. The middle-class son of an architect and a teacher, he grew up worshipping Einstein and aspired to go a step further. “As a teenager, I realized that the grandest thing that one could do as a human is to build something that learns to become smarter than a human,” he says while downing a latte. “Physics is such a fundamental thing, because it’s about the nature of the world and how the world works, but there is one more thing that you can do, which is build a better physicist.”

This goal has been Schmidhuber’s all-consuming obsession for four decades. His younger brother, Christof, remembers taking long family drives through the Alps with Jürgen philosophizing away in the back seat. “He told me that you can build intelligent robots that are smarter than we are,” Christof says. “He also said that you could rebuild a brain atom by atom, and that you could do it using copper wires instead of our slow neurons as the connections. Intuitively, I rebelled against this idea that a manufactured brain could mimic a human’s feelings and free will. But eventually, I realized he was right.” Christof went on to work as a researcher in nuclear physics before settling into a career in finance.

... AGI is far from inevitable. At present, humans must do an incredible amount of handholding to get AI systems to work. Translations often stink, computers mistake hot dogs for dachshunds, and self-driving cars crash. Schmidhuber, though, sees an AGI as a matter of time. After a brief period in which the company with the best one piles up a great fortune, he says, the future of machine labor will reshape societies around the world.

“In the not-so-distant future, I will be able to talk to a little robot and teach it to do complicated things, such as assembling a smartphone just by show and tell, making T-shirts, and all these things that are currently done under slavelike conditions by poor kids in developing countries,” he says. “Humans are going to live longer, healthier, happier, and easier lives, because lots of jobs that are now demanding on humans are going to be replaced by machines. Then there will be trillions of different types of AIs and a rapidly changing, complex AI ecology expanding in a way where humans cannot even follow.” ...

Schmidhuber has annoyed many of his colleagues in AI by insisting on proper credit assignment for groundbreaking work done in earlier decades. Because neural networks languished in obscurity through the 1980s and 1990s, a lot of theoretical ideas that were developed then do not today get the recognition they deserve.

What is still missing on the road to AGI:


... Ancient algorithms running on modern hardware can already achieve superhuman results in limited domains, and this trend will accelerate. But current commercial AI algorithms are still missing something fundamental. They are no self-referential general purpose learning algorithms. They improve some system’s performance in a given limited domain, but they are unable to inspect and improve their own learning algorithm. They do not learn the way they learn, and the way they learn the way they learn, and so on (limited only by the fundamental limits of computability). As I wrote in the earlier reply: "I have been dreaming about and working on this all-encompassing stuff since my 1987 diploma thesis on this topic." However, additional algorithmic breakthroughs may be necessary to make this a practical reality.