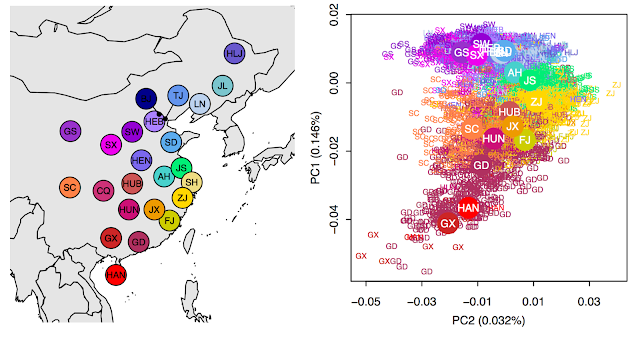 Largest component of genetic variation is a N-S cline (phenotypic N-S gradient discussed here). Variance accounted for by second (E-W) PC vector is much smaller and the Han population is fairly homogeneous in genetic terms: ...while we revealed East-to-West structure among the Han Chinese, the signal is relatively weak and very little structure is discernible beyond the second PC (p.24).

Neandertal ancestry does not vary significantly across provinces, consistent with admixture prior to the dispersal of modern Han Chinese.

As are most non-European populations around the globe, the Han Chinese are relatively understudied in population and medical genetics studies. From low-coverage whole-genome sequencing of 11,670 Han Chinese women we present a catalog of 25,057,223 variants, including 548,401 novel variants that are seen at least 10 times in our dataset. Individuals from our study come from 19 out of 22 provinces across China, allowing us to study population structure, genetic ancestry, and local adaptation in Han Chinese. We identify previously unrecognized population structure along the East-West axis of China and report unique signals of admixture across geographical space, such as European influences among the Northwestern provinces of China. Finally, we identified a number of highly differentiated loci, indicative of local adaptation in the Han Chinese. In particular, we detected extreme differentiation among the Han Chinese at MTHFR, ADH7, and FADS loci, suggesting that these loci may not be specifically selected in Tibetan and Inuit populations as previously suggested. On the other hand, we find that Neandertal ancestry does not vary significantly across the provinces, consistent with admixture prior to the dispersal of modern Han Chinese. Furthermore, contrary to a previous report, Neandertal ancestry does not explain a significant amount of heritability in depression. Our findings provide the largest genetic data set so far made available for Han Chinese and provide insights into the history and population structure of the world's largest ethnic group.