Building the Gadget: A Technical History of the Atomic Bomb 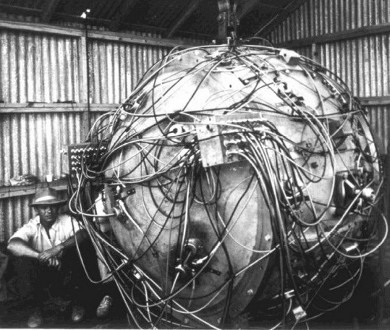 This is the best technical summary of the Los Alamos component of the Manhattan Project that I know of. It includes, for example, detail about the hydrodynamical issues that had to be overcome for successful implosion. That work drew heavily on von Neumann's expertise in shock waves, explosives, numerical solution of hydrodynamic partial differential equations, etc. A visit by G.I. Taylor alerted the designers to the possibility of instabilities in the shock front (Rayleigh–Taylor instability). Concern over these instabilities led to the solid-core design known as the Christy Gadget.


Critical Assembly: A Technical History of Los Alamos during the Oppenheimer Years, 1943-1945

... Unlike earlier histories of Los Alamos, this book treats in detail the research and development that led to the implosion and gun weapons; the research in nuclear physics, chemistry, and metallurgy that enabled scientists to design these weapons; and the conception of the thermonuclear bomb, the "Super." Although fascinating in its own right, this story has particular interest because of its impact on subsequent devel- opments. Although many books examine the implications of Los Alamos for the development of a nuclear weapons culture, this is the first to study its role in the rise of the methodology of "big science" as carried out in large national laboratories.

... The principal reason that the technical history of Los Alamos has not yet been written is that even today, after half a century, much of the original documentation remains classified. With cooperation from the Los Alamos Laboratory, we received authorization to examine all the relevant documentation. The book then underwent a classification review that resulted in the removal from this edition of all textual material judged sensitive by the Department of Energy and all references to classified documents. (For this reason, a number of quotations appear without attribution.) However, the authorities removed little information. Thus, except for a small number of technical facts, this account represents the complete story. In every instance the deleted information was strictly technical; in no way has the Los Alamos Laboratory or the Department of Energy attempted to shape our interpretations. This is not, therefore, a "company history"; throughout the research and writing, we enjoyed intellectual freedom.

... Scientific research was an essential component of the new approach: the first atomic bombs could not have been built by engineers alone, for in no sense was developing these bombs an ordinary engineering task. Many gaps existed in the scientific knowledge needed to complete the bombs. Initially, no one knew whether an atomic weapon could be made. Furthermore, the necessary technology extended well beyond the "state of the art." Solving the technical problems required a heavy investment in basic research by top-level scientists trained to explore the unknown - scientists like Hans Bethe, Richard Feynman, Rudolf Peierls, Edward Teller, John von Neumann, Luis Alvarez, and George Kistiakowsky. To penetrate the scientific phenomena required a deep understanding of nuclear physics, chemistry, explosives, and hydrodynamics. Both theoreticians and experimentalists had to push their scientific tools far beyond their usual capabilities. For example, methods had to be developed to carry out numerical hydrodynamics calculations on a scale never before attempted, and experimentalists had to expand the sensitivity of their detectors into qualitatively new regimes.

... American physics continued to prosper throughout the 1920s and1930s, despite the Depression. Advances in quantum theory stimulated interest in the microscopic structure of matter, and in 1923 Robert Millikan of Caltech was awarded the Nobel Prize for his work on electrons. In the 1930s and 1940s, Oppenheimer taught quantum theory to large numbers of students at the Berkeley campus of the University of California as well as at Caltech. Also at Berkeley in the 1930s and 1940s, the entrepreneurial Lawrence gathered chemists, engineers, and physicists together in a laboratory where he built a series of ever-larger cyclotrons and led numerous projects in nuclear chemistry, nuclear physics, and medicine. By bringing together specialists from different fields to work cooperatively on large common projects, Lawrence helped to create a distinctly American collaborative research endeavor - centered on teams, as in the industrial research laboratories, but oriented toward basic studies without immediate application. This approach flourished during World War II.