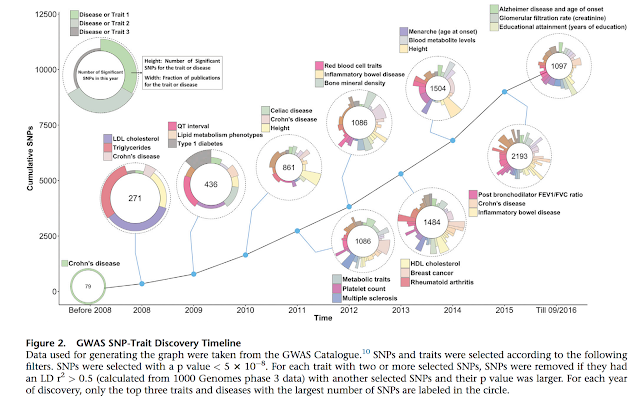 See post from 2012: Five years of GWAS discovery to see how far the field of human genomics has advanced in just a short time.

Application of the experimental design of genome-wide association studies (GWASs) is now 10 years old (young), and here we review the remarkable range of discoveries it has facilitated in population and complex-trait genetics, the biology of diseases, and translation toward new therapeutics. We predict the likely discoveries in the next 10 years, when GWASs will be based on millions of samples with array data imputed to a large fully sequenced reference panel and on hundreds of thousands of samples with whole-genome sequencing data.

Background
Five years ago, a number of us reviewed (and gave our opinion on) the first 5 years of discoveries that came from the experimental design of the GWAS.1 That review sought to set the record straight on the discoveries made by GWASs because at that time, there was still a level of misunderstanding and distrust about the purpose of and discoveries made by GWASs. There is now much more acceptance of the experimental design because the empirical results have been robust and overwhelming, as reviewed here.

... GWAS results have now been reported for hundreds of complex traits across a wide range of domains, including common diseases, quantitative traits that are risk factors for disease, brain imaging phenotypes, genomic measures such as gene expression and DNA methylation, and social and behavioral traits such as subjective well-being and educational attainment. About 10,000 strong associations have been reported between genetic variants and one or more complex traits,10 where “strong” is defined as statistically significant at the genome-wide p value threshold of 5 × 10−8, excluding other genome-wide-significant SNPs in LD (r2 > 0.5) with the strongest association (Figure 2). GWAS associations have proven highly replicable, both within and between populations,11, 12 under the assumption of adequate sample sizes.

One unambiguous conclusion from GWASs is that for almost any complex trait that has been studied, many loci contribute to standing genetic variation. In other words, for most traits and diseases studied, the mutational target in the genome appears large so that polymorphisms in many genes contribute to genetic variation in the population. This means that, on average, the proportion of variance explained at the individual variants is small. Conversely, as predicted previously,1, 13 this observation implies that larger experimental sample sizes will lead to new discoveries, and that is exactly what has occurred over the last decade. ...