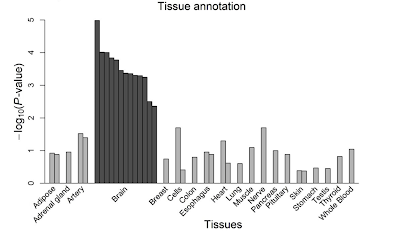 The recently published SSGAC study (Nature News) found 74 genome-wide significant hits related to educational attainment, using a discovery sample of ~300k individuals. The UK Biobank sample of ~110k individuals was used as a replication check of the results. If both samples are combined as a discovery sample 162 SNPs are identified at genome-wide significance. These SNPs are likely tagging causal variants that have some effect on cognitive ability.

The SNP hits discovered are common variants -- both (+) and (-) versions are found throughout the general population, neither being very rare. This means that a typical individual could carry 80 or so (-) variants. (A more precise estimate can be obtained using the minor allele frequencies of each SNP.)

Imagine that we knew the actual causal genetic variants that are tagged by the discovered SNPs (we don't, yet), and imagine that we could edit the (-) version to a (+) version (e.g., using CRISPR; note I'm not claiming this is easy to do -- it's a gedanken experiment). How much would the IQ of the edited individual increase? Estimated effect sizes for these SNPs are uncertain, but could be in the range of 1/4 or 1/10 of an IQ point. Multiplying by ~80 gives as a crude estimate of perhaps 10 or 15 IQ points up for grabs, just from the SSGAC hits alone.

Critics of the study point out that only a small fraction of the expected total genetic variance in cognitive ability is accounted for by SSGAC SNPs. But the estimate above shows that the potential biological effect of these SNPs, taken in aggregate, is not small! Indeed, once many more causal variants are known (eventually, perhaps thousands in total), an unimaginably large enhancement of human cognitive ability might be possible.