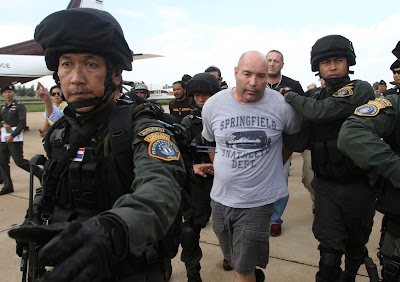 Le Roux ran a global crime empire which accumulated hundreds of millions of dollars, conducted assassinations in multiple countries, and had its own private army. Most criminals are stupid, but Le Roux is highly intelligent, disciplined, hard-working and totally amoral.

(The prisoner in the photo above is not Le Roux, but one of his lieutenants, a former US soldier captured in Thailand.)


Atavist Magazine: The Mastermind: He was a brilliant programmer and a vicious cartel boss, who became a prized U.S. government asset. The Atavist Magazine presents a story of an elusive criminal kingpin, told in weekly installments.

"Not even in a movie. This is real stuff. You see James Bond in the movie and you’re saying, “Oh, I can do that.” Well, you’re gonna do it now. Everything you see, or you’ve thought about you’re gonna do. It’s, it’s real and it’s up to you. You know how the government says if you work through the government [U/I] we don’t know you. Same thing with this job. No different right? So, that’s how it is. Same thing you do in the military except you’re doing for these guys you know? If you get caught in war, you get killed, right? Unless you surrender if they let you surrender or if you get you know, the same thing. This is… Everything’s just like you’re in war [U/I] now."

Here are the final paragraphs:


... It seemed to me that he tried to apply the detached logic of software to real life. That’s why the DEA schemes must have appealed to him as much as his own. His approach was algorithmic, not moral: Set the program in motion and watch it run.

But Lulu’s comment about infamy stuck with me. Perhaps that wasn’t Le Roux’s aim at first, but over time it became something he coveted. Le Roux had known all along that he’d get caught—ultimately, the program could only lead to one outcome. But that meant that I, too, was part the design.

One afternoon, two months ago, I met an Israeli former employee of Le Roux’s at a quiet upstairs table in a café inside a Tel Aviv mall. I’d had a difficult time persuading this man to talk to me at all. He was free of Le Roux’s organization, on to new things. He hadn’t been indicted in the prescription-drug case, despite working in one of the call centers, although he said he planned to wait a few years before traveling to the U.S., just in case. I asked him this question, too: What did Le Roux want? “He wanted to be the biggest ever caught,” he said.

As we said good-bye, he told me, “What’s important is that justice be done, for what Paul did.” Then he leaned in, pointing at my notebook. “If you publish this story, ultimately you are giving him what he wanted. And by talking to you I guess I am, too. This is what he wanted. This story to be told, in this way.”