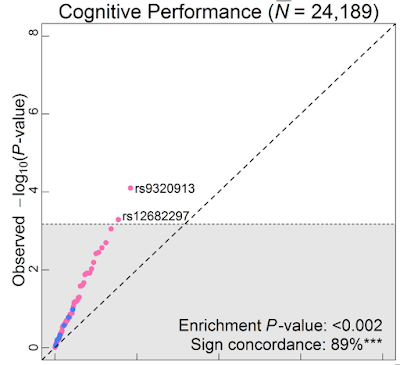 EA was used in order to assemble as large a sample as possible (~300k individuals). Specific cognitive scores are only available for a much smaller number of individuals. But SNPs associated with EA are likely to also be associated with cognitive ability -- see figure above.

The evidence is strong that cognitive ability is highly heritable and highly polygenic. With even larger samples we'll eventually be able to build good genomic predictors for cognitive ability.

Educational attainment is strongly influenced by social and other environmental factors, but genetic factors are estimated to account for at least 20% of the variation across individuals1. Here we report the results of a genome-wide association study (GWAS) for educational attainment that extends our earlier discovery sample1,2 of 101,069 individuals to 293,723 individuals, and a replication study in an independent sample of 111,349 individuals from the UK Biobank. We identify 74 genome-wide significant loci associated with the number of years of schooling completed. Single- nucleotide polymorphisms associated with educational attainment are disproportionately found in genomic regions regulating gene expression in the fetal brain. Candidate genes are preferentially expressed in neural tissue, especially during the prenatal period, and enriched for biological pathways involved in neural development. Our findings demonstrate that, even for a behavioural phenotype that is mostly environmentally determined, a well-powered GWAS identifies replicable associated genetic variants that suggest biologically relevant pathways. Because educational attainment is measured in large numbers of individuals, it will continue to be useful as a proxy phenotype in efforts to characterize the genetic influences of related phenotypes, including cognition and neuropsychiatric diseases.


Here's what I wrote back in September of 2015, based on a talk given by James Lee on this work.


James Lee talk at ISIR 2015 (via James Thompson) reports on 74 hits at genome-wide statistical significance (p < 5E-8) using educational attainment as the phenotype. Most of these will also turn out to be hits on cognitive ability.

To quote James: "Shock and Awe" for those who doubt that cognitive ability is influenced by genetic variants. This is just the tip of the iceberg, though. I expect thousands more such variants to be discovered before we have accounted for all of the heritability.

Genome-wide association studies (GWAS) have revealed much about the biological pathways responsible for phenotypic variation in many anthropometric traits and diseases. Such studies also have the potential to shed light on the developmental and mechanistic bases of behavioral traits.

Toward this end we have undertaken a GWAS of educational attainment (EA), an outcome that shows phenotypic and genetic correlations with cognitive performance, personality traits, and other psychological phenotypes. We performed a GWAS meta-analysis of ~293,000 individuals, applying a variety of methods to address quality control and potential confounding. We estimated the genetic correlations of several different traits with EA, in essence by determining whether single-nucleotide polymorphisms (SNPs) showing large statistical signals in a GWAS meta-analysis of one trait also tend to show such signals in a meta-analysis of another. We used a variety of bio-informatic tools to shed light on the biological mechanisms giving rise to variation in EA and the mediating traits affecting this outcome. We identified 74 independent SNPs associated with EA (p < 5E-8). The ability of the polygenic score to predict within-family differences suggests that very little of this signal is due to confounding. We found that both cognitive performance (0.82) and intracranial volume (0.39) show substantial genetic correlations with EA. Many of the biological pathways significantly enriched by our signals are active in early development, affecting the proliferation of neural progenitors, neuron migration, axonogenesis, dendrite growth, and synaptic communication. We nominate a number of individual genes of likely importance in the etiology of EA and mediating phenotypes such as cognitive performance.

For a hint at what to expect as more data become available, see Five Years of GWAS Discovery and On the genetic architecture of intelligence and other quantitative traits. 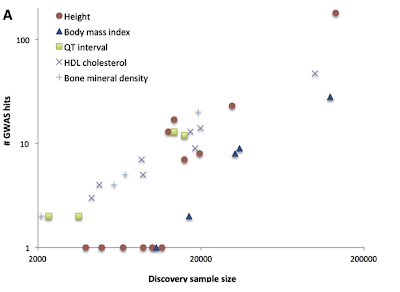 What was once science fiction will soon be reality.


Long ago I sketched out a science fiction story involving two Junior Fellows, one a bioengineer (a former physicist, building the next generation of sequencing machines) and the other a mathematician. The latter, an eccentric, was known for collecting signatures -- signed copies of papers and books authored by visiting geniuses (Nobelists, Fields Medalists, Turing Award winners) attending the Society's Monday dinners. He would present each luminary with an ornate (strangely sticky) fountain pen and a copy of the object to be signed. Little did anyone suspect the real purpose: collecting DNA samples to be turned over to his friend for sequencing! The mathematician is later found dead under strange circumstances. Perhaps he knew too much! ...