The educational, occupational, and creative accomplishments of the profoundly gifted participants (IQs > 160) in the Study of Mathematically Precocious Youth (SMPY) are astounding, but are they representative of equally able 12-year-olds? Duke University’s Talent Identification Program (TIP) identified 259 young adolescents who were equally gifted. By age 40, their life accomplishments also were extraordinary: Thirty-seven percent had earned doctorates, 7.5% had achieved academic tenure (4.3% at research-intensive universities), and 9% held patents; many were high- level leaders in major organizations. As was the case for the SMPY sample before them, differential ability strengths predicted their contrasting and eventual developmental trajectories—even though essentially all participants possessed both mathematical and verbal reasoning abilities far superior to those of typical Ph.D. recipients. Individuals, even profoundly gifted ones, primarily do what they are best at. Differences in ability patterns, like differences in interests, guide development along different paths, but ability level, coupled with commitment, determines whether and the extent to which noteworthy accomplishments are reached if opportunity presents itself.


Over the past 35 years, Duke TIP has assessed more than 2.5 million of the most intellectually talented young adolescents in the United States (Putallaz et al., 2005). It has done so by inviting young adolescents who score in the top 3 to 5% on achievement tests, routinely administered in their schools, to take college entrance exams such as the SAT. For the current study, SAT data on more than 425,000 Duke TIP participants were examined to identify a sample equivalent to Kell, Lubinski, and Benbow’s (2013) in both age and ability level. All participants were enrolled in Duke TIP’s talent search prior to 1995 and had earned scores of least 700 on the SAT-Math or at least 630 on the SAT-Verbal (or both) before reaching age 13— which placed them in the top 0.01% of ability for their age group. 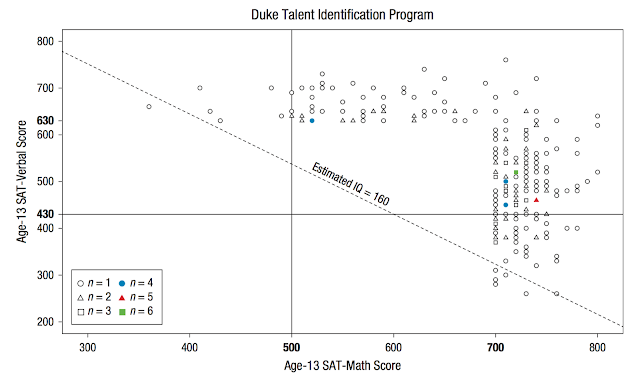 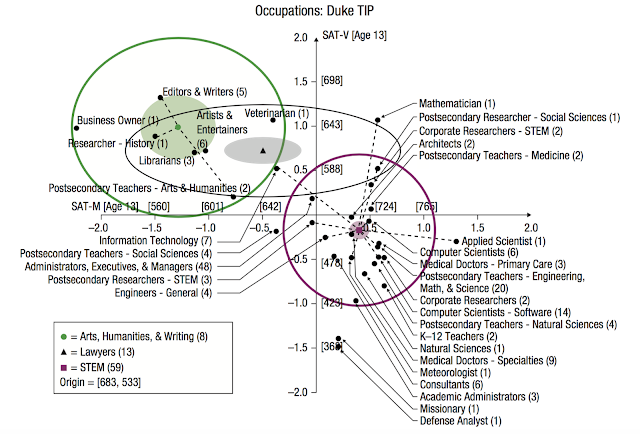