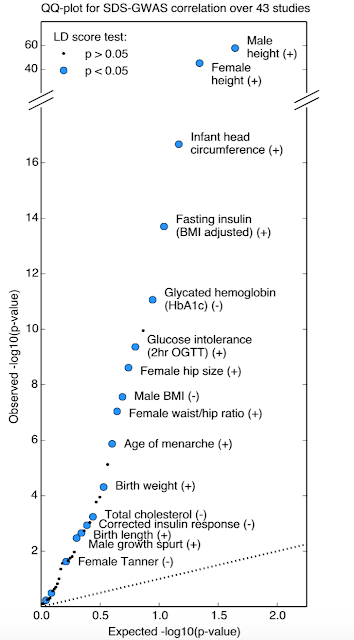 This new paper describes a technique for detecting recent (i.e., last 2k years) selection on both Mendelian and polygenic traits. The authors find evidence for selection on a number of phenotypes, ranging from hair and eye color, to height and head size (the data set they applied their method to was UK10K whole genomes, so results are specific to the British). This is a remarkable result, which confirms the hypothesis that humans have been subject to strong selection in the recent past -- i.e., during periods documented by historical record.

See this 2008 post Recent natural selection in humans, in which I estimate that significant selection on millennial (1000 year) timescales is plausible. Evidence for selection on height in Europe over the last 10k years or less has been accumulating for some time: see, e.g., Genetic group differences in height and recent human evolution.

How does the new method work?

Strong selection in the recent past can cause allele frequencies to change significantly. Consider two different SNPs, which today have equal minor allele frequency (for simplicity, let this be equal to one half). Assume that one SNP was subject to strong recent selection, and another (neutral) has had approximately zero effect on fitness.  The advantageous version of the first SNP was less common in the far past, and rose in frequency recently (e.g., over the last 2k years). In contrast, the two versions of the neutral SNP have been present in roughly the same proportion (up to fluctuations) for a long time. Consequently, in the total past breeding population (i.e., going back tens of thousands of years) there have been many more copies of the neutral alleles (and the chunks of DNA surrounding them) than of the positively selected allele. Each of the chunks of DNA around the SNPs we are considering is subject to a roughly constant rate of mutation.

Looking at the current population, one would then expect a larger variety of mutations in the DNA region surrounding the neutral allele (both versions) than near the favored selected allele (which was rarer in the population until very recently, and whose surrounding region had fewer chances to accumulate mutations). By comparing the difference in local mutational diversity between the two versions of the neutral allele (should be zero modulo fluctuations, for the case MAF = 0.5), and between the (+) and (-) versions of the selected allele (nonzero, due to relative change in frequency), one obtains a sensitive signal for recent selection. See figure at bottom for more detail. In the paper what I call mutational diversity is measured by looking at distance distribution of singletons, which are rare variants found in only one individual in the sample under study.

Some numbers: For a unique lineage, ~100 de novo mutations per generation, over ~100 generations = 1 de novo per ~300kb, similar to singleton interval length scale. Note singletons defined in a sample of 10k individuals in the current population; distribution would vary with sample size.

Detection of recent natural selection is a challenging problem in population genetics, as standard methods generally integrate over long timescales. Here we introduce the Singleton Density Score (SDS), a powerful measure to infer very recent changes in allele frequencies from contemporary genome sequences. When applied to data from the UK10K Project, SDS reflects allele frequency changes in the ancestors of modern Britons during the past 2,000 years. We see strong signals of selection at lactase and HLA, and in favor of blond hair and blue eyes. Turning to signals of polygenic adaptation we find, remarkably, that recent selection for increased height has driven allele frequency shifts across most of the genome. Moreover, we report suggestive new evidence for polygenic shifts affecting many other complex traits. Our results suggest that polygenic adaptation has played a pervasive role in shaping genotypic and phenotypic variation in modern humans. 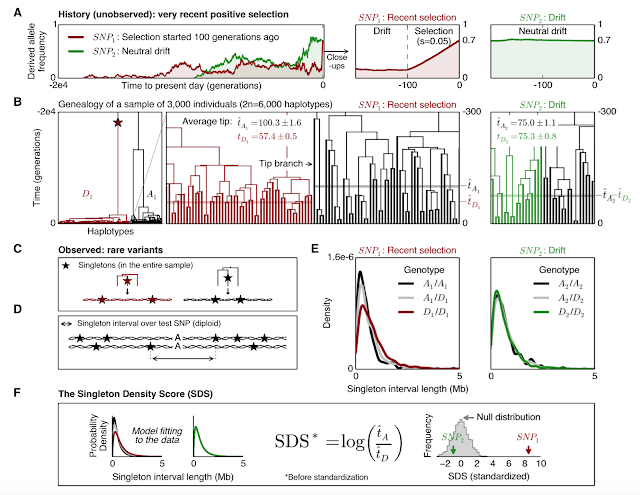