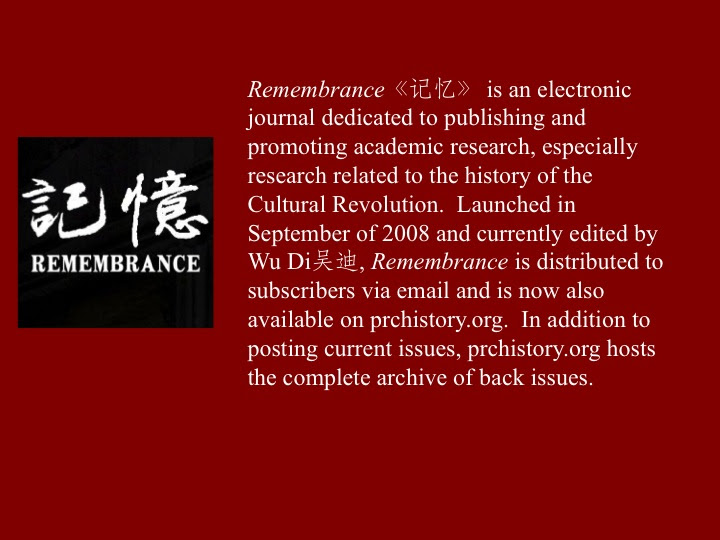 For those that can read Chinese, the journal Remembrance is archived here.

My father intended to take a sabbatical at Tsinghua University in Beijing when I was in grade school, but reconsidered it because of the craziness of the Cultural Revolution. I recall going with my mom and brother to get a passport photo taken in downtown Ames. Instead, we ended up at the University of Chicago, where my dad worked with another fluid dynamicist interested in vortices and tornadoes. My brother and I knew nothing about the Cultural Revolution, despite my dad's occasional comments. But we did realize we weren't in Iowa anymore when we saw the half dozen locks and iron bar on the door of our Hyde Park apartment in Chicago.


NY Review of Books: ... Besides Remembrance, China has roughly half a dozen other samizdat publications that explore the past through accounts of personal experience, including Scars of the Past (Wangshi Weihen), Annals of the Red Crag (Hongyan Chunqiu), and Yesterday (Zuotian). In addition, there are a growing number of underground documentary films, including some that send students to collect oral histories in villages that suffered during the Great Leap Famine or the Cultural Revolution.

One Saturday this spring, several of Remembrance’s regular writers stopped by the Tiantongyuan apartment for a pot of Pu’er tea and a chat with the journal’s cofounder, the retired film historian Wu Di. As they arrived, Wu leaned back in his chair and gave a running commentary on each. Among them were a computer data specialist at a technical university (“the greatest specialist on Lin Biao!”), an editor of the Communist Party’s flagship newspaper People’s Daily (“obviously he has to keep a low profile”), and a befuddled professor who had to call Wu three times to get directions (“what an egghead—he knows everything about violence in the Cultural Revolution but doesn’t know how to hail a gypsy cab”).

... Yet the memories of his youth stayed with him. He knew he had witnessed history and spent the 1980s carefully writing down what he’d heard, corroborating information with eyewitnesses. A fresh finding was the degree of ethnic hatred that underlay the violence. Official figures show that during the Cultural Revolution in Inner Mongolia 22,900 died and 790,000 were imprisoned, but there was no atonement and no discussion of the fact that most of the killers were Chinese or that the victims overwhelmingly were Mongolians. Wu’s conclusion was that this unresolved era continues to underlie ethnic tensions in the region.

But the manuscript was unpublishable and there was no Remembrance to get even the gist of it published in China. It lay in Wu’s desk drawer, a fading memory of the windswept Mongolian steppes. ...

... According to arcane rules that everyone accepts but whose origins no one knows, China’s public security classifies e-mails to fewer than two hundred people as a private distribution list; anything more is a publication, which means censorship and oversight. So officially, Remembrance’s writers are just people interested in history sending out an e-mail every once in a while to interested friends. It’s not their fault if Remembrance somehow reaches many of China’s educated elite, and is avidly read and collected by researchers abroad. Forwarding is beyond Wu’s control.

Outside, we could hear the men arguing. Their voices rose, until the discussion sounded almost angry; one man seemed to be shouting. The topic was the apologies made to victims of the Cultural Revolution, which had caused much debate in China’s social media in 2013 and 2014. The group could not agree whether it was a good thing or not. I prepared to go over and listen in. Dai looked up.

“They get heated, but it’s a chance for a release. They teach at universities but can’t teach this to their students. Think about that.”