Power and paranoia in Silicon Valley 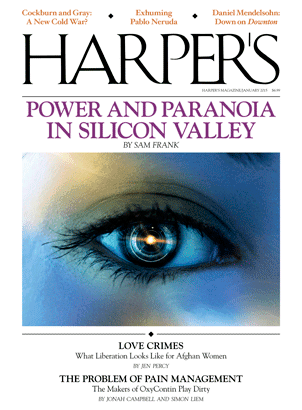 Plenty of fear and loathing of the nerd rapture backed by powerful VCs in this Harper's article. Ungated version.

Discussed in depth at LessWrong.


... Be explorers; take advantage of this vast new landscape that’s been opened up to us in this time and this place; and bear the torch of applied rationality like brave explorers. And then, like, keep in touch by email.” The workshop attendees put giant Post-its on the walls expressing the lessons they hoped to take with them. A blue one read RATIONALITY IS SYSTEMATIZED WINNING. Above it, in pink: THERE ARE OTHER PEOPLE WHO THINK LIKE ME. I AM NOT ALONE.

... I talked to one of my roommates, a Google scientist who worked on neural nets. The CFAR workshop [[ Center For Applied Rationality ]] was just a whim to him, a tourist weekend. “They’re the nicest people you’d ever meet,” he said, but then he qualified the compliment. “Look around. If they were effective, rational people, would they be here? Something a little weird, no?”

... Were they really going to save the world? From what? “Imagine there is a set of skills,” he said. “There is a myth that they are possessed by the whole population, and there is a cynical myth that they’re possessed by 10% of the population. They’ve actually been wiped out in all but about one person in three thousand.” It is important, Vassar said, that his people, “the fragments of the world,” lead the way during “the fairly predictable, fairly total cultural transition that will predictably take place between 2020 and 2035 or so.” We pulled up outside the Rose Garden Inn. He continued: “You have these weird phenomena like Occupy where people are protesting with no goals, no theory of how the world is, around which they can structure a protest. Basically this incredibly, weirdly, thoroughly disempowered group of people will have to inherit the power of the world anyway, because sooner or later everyone older is going to be too old and too technologically obsolete and too bankrupt. The old institutions may largely break down or they may be handed over, but either way they can’t just freeze. These people are going to be in charge, and it would be helpful if they, as they come into their own, crystallize an identity that contains certain cultural strengths like argument and reason.” I didn’t argue with him, except to press, gently, on his particular form of elitism. His rationalism seemed so limited to me, so incomplete. “It is unfortunate,” he said, “that we are in a situation where our cultural heritage is possessed only by people who are extremely unappealing to most of the population.” That hadn’t been what I’d meant. I had meant rationalism as itself a failure of the imagination. “The current ecosystem is so totally fucked up,” Vassar said. “But if you have conversations here” -- he gestured at the hotel -- “people change their mind and learn and update and change their behaviors in response to the things they say and learn. That never happens anywhere else.” ...

Makes me wish I still lived in the Bay Area :-)  My MIRI interview.
Posted by Steve Hsu at 3:10 PM

I didn't read much loathing in it. A few cheap laughs, maybe.