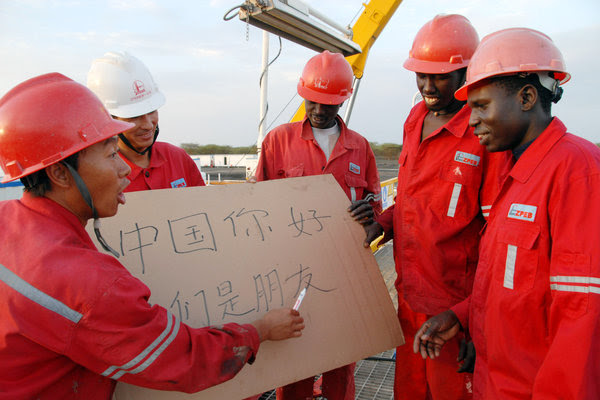 Another recommendation: China's Second Continent: How a Million Migrants Are Building a New Empire in Africa by Howard French (a former Africa and China correspondent for the NY Times). This is real boots on the ground reporting. French (a Mandarin speaker) spent time with Chinese immigrants across Africa, from small shopkeepers and farmers to real estate moguls and high government officials. Reviews: WSJ, NYTimes.

An interview with French on the Sinica podcast.


Exactly how exploitative are Chinese development activities on the African continent? What exactly is motivating the various resources-for-development deals inked by African governments over the last decade, and what strategies are these governments now adopting in the face of power imbalances with China? What is driving the mass migration of Chinese workers to the African continent, and why does everyone from Senegal seem to come from Henan?

This week on Sinica, we ask these questions and many more as Kaiser Kuo and Jeremy Goldkorn are joined in conversation with Howard French. If you've spent a while in China, you may have heard of Howard as the author of a well-known book on Shanghai's architectural legacy, and lecturer on the subject. What you may not know is that he is also an expert on African development, and the new author of China's Second Continent: How a Million Migrants Are Building a New Empire in Africa.


I wonder whether French is familiar with Galton's famous (and very politically incorrect; written in 1873) letter Africa for the Chinese. In some respects Galton is eerily prescient.


... The Chinaman is a being of another kind, who is endowed with a remarkable aptitude for a high material civilization. He is seen to the least advantage in his own country, where a temporary dark age still prevails, which has not sapped the genius of the race, though it has stunted the development of each member of it, by the rigid enforcement of an effete system of classical education which treats originality as a social crime. All the bad parts of his character, as his lying and servility, spring from timidity due to an education that has cowed him, and no treatment is better calculated to remedy that evil than location in a free settlement. The natural capacity of the Chinaman shows itself by the success with which, notwithstanding his timidity, he competes with strangers, wherever he may reside. The Chinese emigrants possess an extraordinary instinct for political and social organization; they contrive to establish for themselves a police and internal government, and they give no trouble to their rulers so long as they are left to manage those matters by themselves. They are good-tempered, frugal, industrious, saving, commercially inclined, and extraordinarily prolific. They thrive in all countries, the natives of the Southern provinces being perfectly able to labor and multiply in the hottest climates. ...

... The pressure of population in China is enormous, and its outflow is great and increasing. There is no lack of material for a suitable immigration into Africa. ... The Chinese have a land hunger, as well as a love for petty traffic, and they would find a field in which to gratify both of these tastes on the East African Coast. There are many Chinese capitalists resident in foreign parts who might speculate in such a system and warmly encourage it. ...

How does one say "Lebensraum" in Mandarin?