"We live in capitalism. Its power seems inescapable; so did the divine right of kings." 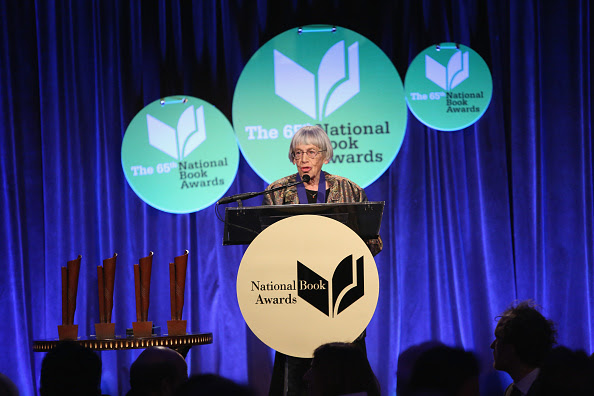 Ursula K. Le Guin, remarks at the National Book Awards. She acknowledged her fellow fantasy and sci-fi writers, who have for so long watched “the beautiful awards,” like the one she received, go to the “so-called realists.”


New Yorker: ... I think hard times are coming, when we will be wanting the voices of writers who can see alternatives to how we live now, and can see through our fear-stricken society and its obsessive technologies, to other ways of being. And even imagine some real grounds for hope. We will need writers who can remember freedom: poets, visionaries—the realists of a larger reality. Right now, I think we need writers who know the difference between production of a market commodity and the practice of an art. The profit motive is often in conflict with the aims of art. We live in capitalism. Its power seems inescapable; so did the divine right of kings. … Power can be resisted and changed by human beings; resistance and change often begin in art, and very often in our art—the art of words. I’ve had a long career and a good one, in good company, and here, at the end of it, I really don’t want to watch American literature get sold down the river. … The name of our beautiful reward is not profit. Its name is freedom.

The profit motive is often in conflict with the aims of art.

as if "art" has ever been anything other than a game played by the rich with the "artist" as pawn.

better name for art is "fart".

it's one of my habits. there's a special section on airplanes for me now. after sex I really like to light one up.

In the US, total cost of government was (conservatively, and ignoring dead-weight effects which are huge) 51% of GDP, so we are less than half capitalist. http://costofgovernment.org/cost-government-arrives-july-a1853