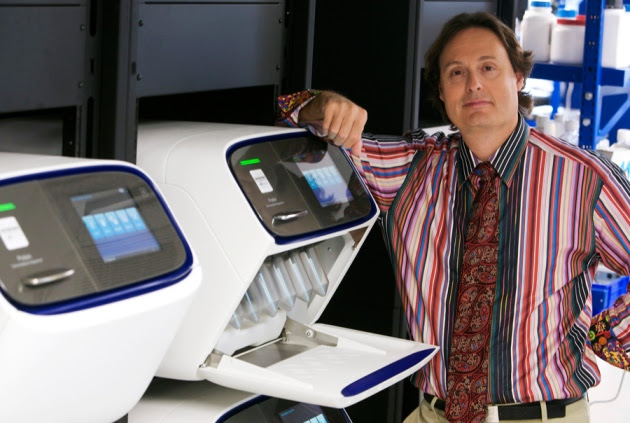 I met Jonathan Rothberg, a real pioneer in genetic sequencing technology, at Scifoo back in 2008 (see Gene machines). Jonathan's foundation is now backing an effort similar to the BGI Cognitive Genomics project. He may not remember, but we had a long conversation about this topic on the bus from the hotel to the Googleplex.

I've agreed to participate in Project Einstein (I am not worthy!) as a DNA donor, and I hope that our projects will someday share data and resources. Rothberg's attitude is typical of a true innovator: damn the critics, full speed ahead!


Nature: He founded two genetic-sequencing companies and sold them for hundreds of millions of dollars. He helped to sequence the genomes of a Neanderthal man and James Watson, who co-discovered DNA’s double helix. Now, entrepreneur Jonathan Rothberg has set his sights on another milestone: finding the genes that underlie mathematical genius.

Rothberg and physicist Max Tegmark, who is based at the Massachusetts Institute of Technology in Cambridge, have enrolled about 400 mathematicians and theoretical physicists from top-ranked US universities in a study dubbed ‘Project Einstein’. They plan to sequence the participants’ genomes using the Ion Torrent machine that Rothberg developed.

The team will be wading into a field fraught with controversy. Critics have assailed similar projects, such as one at the BGI (formerly the Beijing Genomics Institute) in Shenzhen, China, that is sequencing the genomes of 1,600 people identified as mathematically precocious children in the 1970s (see Nature 497, 297–299; 2013).

... Rothberg has long been interested in cognition. He is also in awe of the abilities of famous scientists. “Einstein said ‘the most incomprehensible thing about the Universe is that it is comprehensible’,” he says. “I’d love to find the genes that make the Universe comprehensible.”

There is precedent to the concept of sequencing extreme outliers in a population in the hunt for influential genes. Scientists have used the technique to sift for genes that influence medical conditions such as high blood pressure and bone loss. Some behavioural geneticists, such as Robert Plomin at King’s College London, who is involved with the BGI project, say that there is no reason that this same approach won’t work for maths ability. As much as two-thirds of a child’s mathematical aptitude seems to be influenced by genes (Y. Kovas et al. Psychol. Sci. 24, 2048–2056; 2013).

... The Rothberg Institute for Childhood Diseases, Rothberg’s private foundation based in Guilford, Connecticut, is the study’s sponsor. But Rothberg won’t say who is funding the project, which other geneticists estimate will cost at least US$1 million. Some speculate that Rothberg is funding it himself. In 2001, Fortune estimated his net worth to be $168 million, and that was before he sold the sequencing companies he founded — 454 Life Sciences and Ion Torrent, both based in Connecticut — for a combined total of $880 million.

Rothberg is adamant that the project is well worth the time and the money, whoever is paying for it. “This study may not work at all,” he says — before adding, quickly, that it “is not a crazy thing to do”. For a multimillionaire with time on his hands, that seems to be justification enough.

Let me repeat the scientific motivations for this type of project. The human brain is arguably the most complex object we know of in the universe. Yet, it is constructed from a blueprint containing less than a few gigabits of information. Unlocking the genetic architecture of cognition is one of the greatest challenges -- now feasible in the age of genomics that Rothberg and others helped bring into existence.

For a discussion of previous GWAS results on general cognition, and their implications for the prospects of studies like Project Einstein, see First GWAS hits for cognitive ability. For general background on the science, watch this video. Or read these: MIRI interview, FAQ.
Posted by Steve Hsu at 4:56 PM

it's good to see steve admits the possibility that intelligence and maths ability aren't the same thing.


even maths ability is not homogeneous. there was a hungarian mathematician (not halmos, but something -os) who remarked in his autobio on the difficulty he had with analysis and that northern europeans and east asians excelled at those areas requiring visualization and southern europeans and jews at the more abstract.

Btw how is BGI doing ? I heard the progress is much less than expected and there was no statistically significant correlation found (not that I dont believe in the approach in principly but I did hope it would produce useful results)

Unravelling the genetic architecture of cognition seems a far ways off from merely predicting individual differences. Then again it might be that finding IQ genes helps point the way to finding nootropics and curing retardation.

All thanks to Daniel MacArthur for chiming in with his two cents.

“[T]he evidence for an association between the [MAOA] VNTR variant and antisocial behaviour is substantially more consistent than most of these associations. This may well be one of the rare cases of genuine associations.” --Daniel MacArthur on GNXP in 2009

“By historical analogy, most if not all of this [MAOA] literature is wrong and will soon be forgotten.” --Daniel MacArthur on Genomes Unzipped in 2011

“If [BGI] think they’re likely to get much useful data out of this study, they’re almost certainly wrong.”

Project Einstein “is unlikely to have any statistical power.”

I suppose this guy is real smart and successful, and getting picked for his project is very flattering, but to modify a story about Von Neumann, I have absolutely no desire to meet whoever sells his shirts.

This seems important to BGI and Project Einstein:


Mosaic Copy Number Variation in Human Neurons; http://www.sciencemag.org/content/342/6158/632
"Contrary to what we once thought, the genetic makeup of neurons in the brain aren't identical, but are made up of a patchwork of DNA," says corresponding author Fred Gage.http://medicalxpress.com/news/2013-11-patchwork-genetic-variation-brain.html

Also, my fiance does work on nutrition and cognitive development. From what I gather, nutrition can have a profound effect on learning and memory, and the seeds for these effects start with the mother's diet *pre-conception*. Of course, nutrition during pregnancy also matters (and breast feeding boosts IQ). This suggests that a significant source of non-genetic variation cannot be accounted for in twin studies (assuming twins get the same neonatal nutrition), which might lead us to overestimate the extent to which intellect is fixed by genes.

(but, ironically, it might not lead us to overestimate the extent to which intellect is fixed by the time an IQ test can be administered)

This idea has actually bee studied somewhat. E.g. they've compared twins who do and don't share a placenta. There have even been studies done comparing cohorts of IVF babies raised in different wombs (one of these found that the inheritance of cigarette addiction was *not* caused by the mother smoking during pregnancy). I'm not incredibly familiar with the literature but the impression I've gotten is that it plays significant effects and needs to be researched more.

That's fascinating! I'll need to do a more careful search of what's out there.

Aha, found the article where I originally read about the research, very in depth summary:

@Steve, what are your thoughts on the question of prenatal environment?

I taught statistics for a couple years. I developed a Schick about math ability. In the first class I would ask them if any of them were good at math. When someone worked up the courage to answer, I would ask him (it was always a he) "What's the 27th root of 192?" Or some other crazy set of numbers. Then I would show him that my cheap pocket calculator which didn't have the IQ of a cockroach could produce the correct answer in a half second.
The point I was trying to make was that no human being is good at math. It's just that some are less bad than others. That's an important distinction. There will be a day fairly soon that humans will have made themselves good at math, but my guess is that it will come sooner from some kind of machine interface not genetic research. The same thing is true for verbal ability. Right now we test youngsters for their General Knowledge. We might be impressed with a kid who could name all the US Presidents in order. But we won't be impressed when everyone has a link to Wikipedia imbedded in their mastoid process.
My first job out of grad school was in medical research. I was a consultant in Nixon's War on Cancer. The absolutely whacky thing about that job was that I - and all the other consultants - were hired for our math ability and training. Medical knowledge or even just an exposure to college level biology were considered irrelevant. There were many obscure discussions around the office on Eigen values and triple integrals but we didn't cure cancer - you may have noticed. It's not clear to me that super math ability - which I certainly don't have - is all that useful. In general most professionals I have met in business and government can do little more than long division. Many managers and executives are stumped when they have to calculate a percentage. Society would be better served, I think, by bringing up the masses rather than by adding to the extreme math outliers.

"We might be impressed with a kid who could name all the US Presidents in order."


bragging: when i was nine and suspected of "underachievement" i scored at the mean for 18 y olds on a test of "general knowledge", but the only person i've met who could name all the us presidents in order was a very handsome young man named "olivier" (his sister was even prettier). he was from southern france. a friend of my father's had met him on a ski holiday. we went through oregon wine country.


and watson won the jeopardy! contest.


"It's not clear to me that super math ability - which I certainly don't have - is all that useful."


and in a mathematician's apology hardy agreed. he apologized for himself by claiming he had no talent for anything else. it is a PREJUDICE of the academy that as close to physics as possible even if inappropriate to the subject matter the better and the more respectable.


i say this as a maths major and former actuary.

and if i asked the smartest people i've known to consider volunteering would their saliva be worth more than spit?

Doing hard arithmetic operations does not completely represent real math ability. There is obviously some correlation but real math ability is the capacity to work with abstractions and patterns rather than pure number crunching.

I highly doubt triple integrals and eigenvalues are obscure topics, they´re pretty much what a 1st year (or highschooler!) knows but then we are talking about doctors xD.
Maybe you are giving a picture of a not so distant past but still very different. Nowadays I think it will be very embarrassing if some executive can´t do basic GMAT questions. In fact they probably can´t get that job without a high GMAT.