As I wrote in an earlier post Beanbags and Causal Variants:


Not only do these results implicate common causal variants as the source of heritability in disease susceptibility, but they also suggest that gene-gene (epistasis) and gene-environment interactions are of limited impact. Both the genetic and environmental backgrounds for a particular allele vary across Eurasia, so replicability puts an upper limit on their influence. See also Epistasis vs Additivity.

How can it be? But what about the marvelous incomprehensible beautiful sacred complexity of Nature? But But But ...

In the blood pressure (BP) study cited below, the data include East and South Asians, African Americans and Europeans. The effect sizes of variants in one population are well correlated with effect sizes in other populations, despite changes in the genetic background (i.e. other genes) and environments with which they interact. This suggests the interaction effects are small. 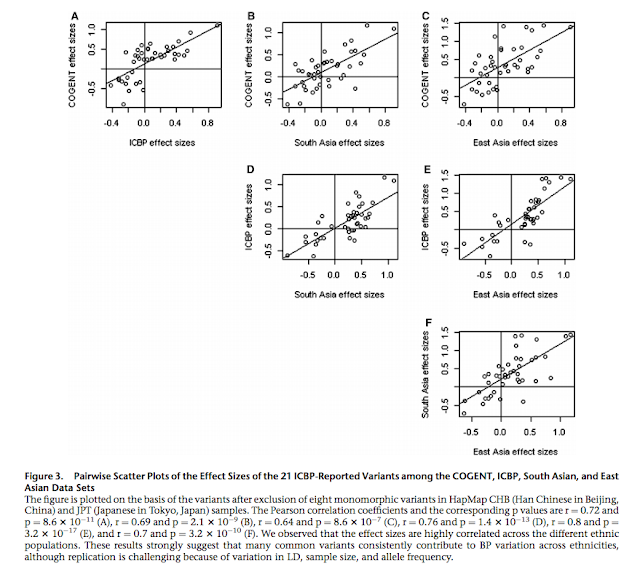 
A Defense of Beanbag Genetics

My friend Professor Ernst Mayr, of Harvard University, in his recent book Animal Species and Evolution1, which I find admirable, though I disagree with quite a lot of it, has the following sentences on page 263.


The Mendelian was apt to compare the genetic contents of a population to a bag full of colored beans. Mutation was the exchange of one kind of bean for another. This conceptualization has been referred to as “beanbag genetics”. Work in population and developmental genetics has shown, however, that the thinking of beanbag genetics is in many ways quite misleading. To consider genes as independent units is meaningless from the physiological as well as the evolutionary viewpoint.  [Italics mine]

... In another place2 Mayr made a more specific challenge. He stated that Fisher, Wright, and I “have worked out an impressive mathematical theory of genetical variaion and evolutionary change. But what, precisely, has been the contribution of this mathematical school to evolutionary theory, if I may be permitted to ask such a provocative question?” “However,” he continued in the next paragraph, “I should perhaps leave it to Fisher, Wright, and Haldane to point out what they consider their major contributions.” ...

Now, in the first place I deny that the mathematical theory of population genetics is at all impressive, at least to a mathematician. On the contrary, Wright, Fisher, and I all made simplifying assumptions which allowed us to pose problems soluble by the elementary mathematics at our disposal, and even then did not always fully solve the simple problems we set ourselves. Our mathematics may impress zoologists but do not greatly impress mathematicians. Let me give a simple example. ...

See also Eric, why so gloomy?


Fisher's Fundamental Theorem of Natural Selection identifies additive variance as the main driver of evolutionary change in the limit where selection timescales are much longer than recombination (e.g., due to sexual reproduction) timescales. Thus it is reasonable to expect that most of the change in genus Homo [traits which have been under selection] over the last millions of years is encoded in a linear genetic architecture.

so this is a wet blanket for those who would hope to see the heritability of iq be a local phenomenon.


but, still, the effect must be relative to the locale for bp, as bp varies a great deal from place to place. the difference even in europe can be huge, 20 points in the systolic between finish women and women in southern france.


and of course, as steve may know, almost anyone, barring an adrenal tumor or kidney disease can get a bp of 100/60 with the right changes in "lifestyle".

so can anyone get an iq of > 140 with the right changes barring down's syndrome, or a kick in the head, etc.? steve would like to say no to that.

it used to be thought that bp increased with age "naturally".


i remember in theroux's happy isles of oceania he comes across a doctor studying some melanesians. the doctor had found that bp DECREASED with age in this population.


it's wasn't genetic. ALL transitions from the traditional diet and "lifestyle" to more "modern" versions has resulted in obesity, hypertension, diabetes, and early death for melanesians.


diogenes was on to something.

It does discount the idea that genetics of IQ are alchemical, epistatic magic, so it has that going for it.

Is this a strawman? Did anyone say that epistasis has unlimited impact? Observe that ICBP vs East and South Asia are essentially two identical graphs (only few points are very different). Then observe that COGENT vs ICBP graph has little in common with East vs South Asia graph. So, within the same species there are broad similarities on super complex traits (how that could even not be the case?) but the local genetic background and/or gene-environment interactions still contribute significantly to the phenotype.

Given the statistical errors in estimates of effect sizes I would say the correlation in the graphs is very impressive. A more sophisticated analysis, taking into account uncertainties, could put an nontrivial upper bound on interaction effects.