Richard Ford, MSU class of 1966, delivers a commencement address. The President was busy handing out diplomas and shaking hands, so I had Ford to myself for most of the two hour ceremony. I can't remember the last time I had such an enjoyable discussion of life, literature and writing. 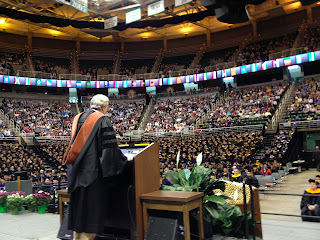 Some quotes and excerpts from Ford below. See also this Paris Review interview.


“You can't write ... on the strength of influence. You can only write a good story or a good novel by yourself.”

“A sad fact, of course, about adult life is that you see the very things you'll never adapt to coming toward you on the horizon. You see them as the problems they are, you worry like hell about them, you make provisions, take precautions, fashion adjustments; you tell yourself you'll have to change your way of doing things. Only you don't. You can't. Somehow it's already too late. And maybe it's even worse than that: maybe the thing you see coming from far away is not the real thing, the thing that scares you, but its aftermath. And what you've feared will happen has already taken place. This is similar in spirit to the realization that all the great new advances of medical science will have no benefit for us at all, thought we cheer them on, hope a vaccine might be ready in time, think things could still get better. Only it's too late there too. And in that very way our life gets over before we know it. We miss it. And like the poet said: The ways we miss our lives are life.”

INTERVIEWER: How old were you when James Meredith was enrolled at the University of Mississippi? FORD: I was eighteen. By that time I was at Michigan State. I was not brave enough or committed enough or selfless enough to stay in Mississippi during the civil-rights movement. I wanted to get out of it. I wanted to go as far away from Mississippi as I could. ... I certainly don’t want to paint myself back then in any way to seem what I wasn’t, which is to say, enlightened. I wasn’t enlightened. I was nothing, that’s what I was. But I knew I was a little nothing—which helped. I knew that there were terrible things coming in Mississippi. I just thought, Uh oh, bad times are coming. I’ve got to get out of here to save myself. To reinvent myself.

“When you are sixteen you do not know what your parents know, or much of what they understand, and less of what's in their hearts. This can save you from becoming an adult too early, save your life from becoming only theirs lived over again--which is a loss. But to shield yourself--as I didn't do--seems to be an even greater error, since what's lost is the truth of your parents' life and what you should think about it, and beyond that, how you should estimate the world you are about to live in.” ― Wildlife

“At the exact moment any decision seems to be being made, it's usually long after the real decision was actually made--like light we see emitted from stars.” ― The Lay of the Land

“I know you can dream your way through an otherwise fine life, and never wake up, which is what I almost did.” ― The Sportswriter

“What was our life like? I almost don't remember now. Though I remember it, the space of time it occupied. And I remember it fondly.” ― The Sportswriter