Positive for most people, but with a lot of genetic variation. Interestingly, a fraction of the population (about 10%) can have a negative health or fitness response to training (see @40 min or so in the video). This professor's company claims to be able to predict exercise response by looking at about 30 gene variants. The talk also has some interesting results concerning high intensity training. 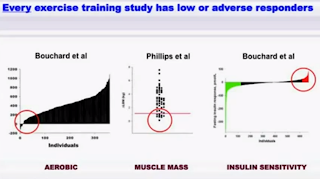 NYTimes: ... That original research, published in a landmark 2010 study, looked into the genetics of why some people respond to endurance exercise so robustly, while others do not. Some lucky men and women take up jogging, for example, and quickly become much more aerobically fit. Others complete the same program and develop little if any additional endurance, as measured by increases in their VO12 max, or their body’s ability to consume and distribute oxygen to laboring muscles.

For the 2010 study, Dr. Timmons and his colleagues genotyped muscle tissue from several groups of volunteers who had completed 6 to 20 weeks of endurance training. They found that about 30 variations in how genes were expressed had a significant effect on how fit people became. The new test looks for those genetic markers in people’s DNA. ...

Yeah. There's a fraction that should lie around all day. BS. This UK prof is fat. What do you expect?

When I raced my bike, we were always lamenting that we should get a muscle biopsy to figure out how to train more appropriately. There is a lot of variability in the 'endurance exercise' name, and I suspect that in this context it is the 'go out and run for 45 minutes' type of endurance exercise. That would be in contrast with the 'go do this 45 minute interval session that does not have a work interval that lasts more than three minutes in it.'

It wouldn't be out of the realm of possibility that there are some people who are much more susceptible to muscle catabolism during long bouts of exercise. In 1999, I went from 208 lbs. to 172 lbs. [as light as I had been since I was a sophomore in HS], because I was riding my bike a lot [instead of, you know, going to class]. When I would get done with a ride [60-90 miles, 3-4ish hours], I would absolutely reek of ammonia. That wasn't because I was burning fat.

Very nice episode on the topic. Worth watching.