A Genetic Code for Genius? 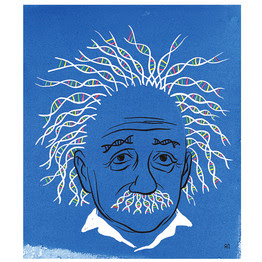 Another BGI Cognitive Genomics story, this time in the Wall Street Journal. I think coverage in the popular press is beneficial if it gets people to think through the implications of future genomic technology. It seems likely that the technology will arrive well before our political leadership and punditocracy have a firm understanding of the consequences. (In support of my point, see the comments on the article at the WSJ site; more at Marginal Revolution.)


WSJ: ... Mr. Zhao is a high-school dropout who has been described as China's Bill Gates. He oversees the cognitive genomics lab at BGI, a private company that is partly funded by the Chinese government.

At the Hong Kong facility, more than 100 powerful gene-sequencing machines are deciphering about 2,200 DNA samples, reading off their 3.2 billion chemical base pairs one letter at a time. These are no ordinary DNA samples. Most come from some of America's brightest people—extreme outliers in the intelligence sweepstakes.

... "People have chosen to ignore the genetics of intelligence for a long time," said Mr. Zhao, who hopes to publish his team's initial findings this summer. "People believe it's a controversial topic, especially in the West. That's not the case in China," where IQ studies are regarded more as a scientific challenge and therefore are easier to fund.

The roots of intelligence are a mystery. Studies show that at least half of the variation in intelligence quotient, or IQ, is inherited. But while scientists have identified some genes that can significantly lower IQ—in people afflicted with mental retardation, for example—truly important genes that affect normal IQ variation have yet to be pinned down.

The Hong Kong researchers hope to crack the problem by comparing the genomes of super-high-IQ individuals with the genomes of people drawn from the general population. By studying the variation in the two groups, they hope to isolate some of the hereditary factors behind IQ.

Their conclusions could lay the groundwork for a genetic test to predict a person's inherited cognitive ability. Such a tool could be useful, but it also might be divisive. ...

For anyone wondering: the "160 [adult] IQ and over" claim in the article is inaccurate. As Steve has previously explained, most of the automatic qualification cutoffs for our volunteer study correspond to ~145 IQ. (Exercise for the reader: construct a model that yields a decent estimate of the fraction of 135-144 IQ people who can be expected to achieve a qualifying score on at least one metric.) Some details about Plomin's samples are wrong as well.

If you replace all explicit and implicit references to "+4 SD" with "+2.5-3 SD", though, you end up with a fairly accurate description of what's going on.

I never saw the paper that identified 1000 human height loci. "Hundreds of variants clustered in genomic loci and biological pathways affect human height" published in Nature in 2010 identified 180 loci, although they do estimate that more loci could be found to explain height.

The current study by Plomin, Visscher, and Deary does not seem to be highly powered; it seems capable of detecting only the most strongest common loci of intelligence, assuming that the genetic architecture imitates that of obesity, as FTO, the most strongest obesity loci, only explains ~0.3-0.4% of the variance. Since, that study only has enough power (presumably at 80% although this was not explicitly stated) to detected loci accounting for 0.24% of the variance in g at genome-wide significance, then most of the casual loci would be inaccessible. Even then, no locus with an effect-size of FTO has been found, while another SNP was inferred to be associated with g, but below genome-wide significance (and with a presumably weaker effect than the 0.24% threshold), because it implicated in another study (and likely inflated, if it is a true association, due to the "winner's curse") and was significant in both the discovery and replication samples. It would have been nice if they incorporated FTO as a positive control, but that would require BMI to be as or almost as heritable in children as in adults and the weight and height of the children to be reported relatively accurately.

I am curious. How much more powerful would the 2000 geniuses, 3+-4+ STD, (and James Holmes, but not me, would be among them :) ) would be in detecting intelligence-related loci than the current Plomin, Visscher, and Deary study? I don't think whole genome sequencing would reveal much additional data, due to linkage disequilibrium in GWAS platforms allows one to capture the majority of human genetic variation in 2 million SNPs. The genius study only interests me because of the inherent power in a highly selected sample, although this would require that the difference between someone who is merely borderline gifted (2+ STD) and extremely intelligence (4+ STD) also be the consequence of genetics, as opposed to favorable environmental and congenital perturbations for the latter. In other words, the same genetic mechanics that determine the differences between a merely gifted person between the rest of the population, also causes the differences between the gifted person and the extremely intelligent person.

I also hope in time that we'll also get an insight into difference between people with high IQs and geniuses ,and that we'll finally stop mixing the two.

Steve - is it too late to send back the sample and still get included?

To be honest, reading that having a high school dropout running such an important lab which is intended to discover and shed light on our intelligence doesn't give me lots of confidence in the project. This is not a start-up environment where a dropout with street smarts can excel. At the same time, I hope Mr. Zhao just provides some organization skills and salesmanship, not the hardcore scientific knowledge nor the experience of interpreting the research results. With my own 140 IQ which doesn't qualify for the sampling population, i would still speculate that this profoundly difficult task, explaining human IQ and genetics, takes more than just a co-author of a paper on cucumber genome. :-)

I wouldn't worry too much about western politicians rejecting the findings. If the Chinese develop a way to increase the IQ of existing or new people then everyone will be lining up to buy it. People become very reality focused when it comes to their kids. After all, even the most blank slate ideologue doesn't raise their kids in the ghetto.

Nor would I worry about the Chinese hogging it. If there is money to be made in selling it then they will sell it.

The only potential problems then are the Chinese getting rich off it (whatever) or only people with enough money being able to partake (at least at first). However, I'd expect those problems to be the same regardless of current political ideas, they always are.

There are some sci-fi type issues (we all assume that a bunch of geniuses would lead to a better society, but perhaps they would all be at each others throats ala Mustapha Mond's depiction of the island of all alpha+s). Also the possibility that we don't get it right at first and there are serious side effects. However, all of that is so far away and unpredictable there is little point of discussing it here.

Genetic engineering stands to potentially solve many existing social problems, though I worry about singularity worship here. Many a person will say, "it's okay we have a totally unsustainable economic policy, because the singularity will create infinite economic growth sometime soon." Similarly one could say, "our blank slate attitude and policies are completely unsustainable, but its okay because genetic engineering will one day make it all mute." This all puts a tremendous amount of pressure on breakthroughs that may or may not happen at some point in the future. That's worrisome. After all, my Dad was convinced we'd have flying cars by now. Instead traffic still sucks.

Not so long until effective IQ selection with embryo selection. :)

When you guys get done with this, I will be interested to see how well your model predicts my IQ [or whatever it is you are using for your g-figure-of-merit].

When will participants receive their results?

i don't. and don't confuse ability to discover and innovate with IQ either. it requires more than just IQ to explain human genetics and even IQ.

I am a new comer to this post and have a question on the side for the community and Professor Hsu. Is there any data and discussion to suggest that, in the age of increased competition from globalization, big national or multinational firms, and technological advances, it takes more and more IQ, up to a threshold (130-135 maybe), for each generation to do "well" relative to their contemporary peers (e.g. top 1%, 5%, 10% in income or wealth), assuming other factors such as social-economic background are the same. If so, does it imply that, for one's children to do as "well" as the parents, they need, on average, higher IQ than the parents? In terms of IQ, I am referring to an aggregate IQ, taken multiple types of intelligence into account. If there is another post that addresses this question, please kindly refer me to it. Thank you.

I thought it was established that most of the general variation is attributable to a small amount across a broad selection of genes. If so embryo selection will be a poor method for selecting for intelligence.

I find this slightly hard to believe given genius clearly running in families (although in some cases this is clearly due in large part to education and environment - for example Erasmus Darwins ideas on the origination of species). A study looking at extremes may find mutations that result in high intelligence which are not commonly found in the population at large, making embryo selection useless, since you likely won't have the genes to select for in the first place.

In either case it seems likely the best bet is breeding the old fashioned way with as many smart people as will have children with you, until we are at the level of engineering specific mutations how we want them, at which points all bests are off.

This research will almost certainly have divisive effects on the society. You are creating (or setting up ground to create later) a product over which people will want to fight bitter fights and hold grudges against each other. Either you distribute the benefits of such research evenly across society, in which case you haven't really done anything, or you benefit certain groups more than others, in which case you intensified the competition in the society and harbored jealousy and resentment, which is obviously undesirable.

Ask yourself: What is the motivation for this project? Why would you want to isolate smart genes? Think about it. It's not just "science". Science is never an end in itself. Even if scientists sometimes manage to fool themselves into thinking otherwise in their ivory towers, no scientific product of such utility is detached from politics.

Try to think of one good (likely) reason why this research will be beneficial for the humanity.

I think this project only serves the egotistical interests of some scientists with self-esteem issues and the society should think really seriously about the long-term consequences of such ill-motivated research. The fact that Chinese people don't care about such things is besides the point. We won't learn humanism and human dignity from them. That's going backwards.

"distribute the benefits of such research evenly across society, in which case you haven't really done anything"

Why do you say that nothing has been done in this scenario?

I don't think that's true. Compare with this post: http://infoproc.blogspot.com/2008/07/annals-of-psychometry-iqs-of-eminent.html (not about Nobel winners per se, but I believe still applicable).