Heckman talk (mp3) at Yale Law School (also available on iTunes). For related results on personality and earnings for cognitively gifted individuals, see Earnings effects of personality, education and IQ for the gifted.

The General Educational Development (GED) credential is issued on the basis of an eight hour subject-based test. The test claims to establish equivalence between dropouts and traditional high school graduates, opening the door to college and positions in the labor market. In 2008 alone, almost 500,000 dropouts passed the test, amounting to 12% of all high school credentials issued in that year. This chapter reviews the academic literature on the GED, which finds minimal value of the certificate in terms of labor market outcomes and that only a few individuals successfully use it as a path to obtain post-secondary credentials. Although the GED establishes cognitive equivalence on one measure of scholastic aptitude, recipients still face limited opportunity due to deficits in noncognitive skills such as persistence, motivation and reliability. The literature finds that the GED testing program distorts social statistics on high school completion rates, minority graduation gaps, and sources of wage growth. Recent work demonstrates that, through its availability and low cost, the GED also induces some students to drop out of school. The GED program is unique to the United States and Canada, but provides policy insight relevant to any nation's educational context. 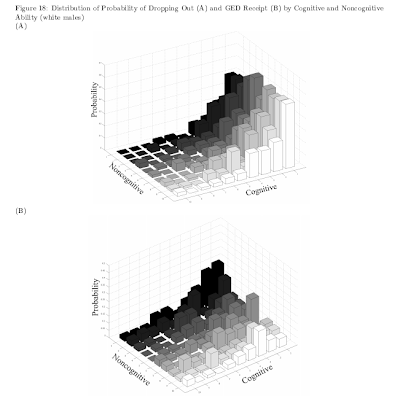 The related question we will be facing in the near future: what are relative job success probabilities for students with degrees from a traditional college versus those with credentials obtained via online education? For example, consider a smart kid who obtains high grades in linear algebra and C++ from MIT/Harvard/Berkeley edX, but chooses not to attend university, versus a graduate from a traditional engineering program. Exactly what is being signaled or predicted by these two life paths? Who would you hire?
Posted by Steve Hsu at 1:36 PM

Steve, I often see you writing about a single, univariate factor called "g" (which has always seemed too reductive to me, but maybe I'm missing your point.) What's your take on "noncognitive" factors?

What Steve said. Also: interesting topic, to sort out what's valuable from education -- and, since we're in the biz, deliver it.

According to the Schott Foundation for Public Education, New York City has the worst four-year high school graduation rate (about 60 percent) in the country. Of those 60 percent, nearly a quarter of them do not graduate after four years
The New York City school budget is approximately $19.1 billion dollars per year. Almost $4.7 billion dollars goes to pensions and interest on debt.
The system is a failure for a great number of students.
Why not just do away with "universal" high school and go right to the GED?

NYC does not either have the worst graduation rate in the country - not even close. Nor does the 'system' have much to do with it.

Would you expect the genetic architecture of personality variation to be similar to what you're currently studying on g? It seems like epistasis may play a significant role http://www3.interscience.wiley.com/cgi-bin/fulltext/101526004/PDFSTART

To get an idea of the lucid thinking going on over at the Schott Foundation, check out this article on the high black graduation rate in Maine.

"Once this inaccuracy in measurement is accounted for, the heritability of non-cognitive factors is almost as high as for g."

That's really interesting. I suspected as much, and this, really, has rather huge implications. It really does diminish the potential role the environment plays in (differential) development. Can you point me in the direction of references on the topic? How do they control for error in personality measurement? And how high does the heritability estimate rise when you do so? As far as I've seen, the general numbers for the heritability of personality traits, such as the Big Five, as well as other things such as most mental disorders and political/religious orientation fall in the 0.4-0.6 range, far short of the 0.8-0.9 range for IQ (with shared environment generally being around 0.0 and "unique environment" covering the rest).

"Labor market outcomes for GED holders are closer to those of high school dropouts than to graduates."

But then of course there's always Scott Aaronson :)

According to the state of Maine, the statewide graduation rate for all students is 84%. http://www.maine.gov/education/gradrates/index.html

This makes me skeptical of the 97% figure for black males that your article claims. Furthermore, apparently there are only 3k black high schoolers in Maine, and blacks make up about 1% of Maine's population overall. Perhaps the 97% figure is the result of a combination of:

I think the data is simply faulty. Now, unfortunately I can't find graduation data broken down by race, but I have found enrollment data by grade and race.

Last year, there were:


As I said, Maine doesn't supply any graduation rate data broken down by race, so I cannot be certain of the exact value of x. That being said, it would be reasonable to assume x is less than 243. Obviously, this yields a black graduation rate way below 97%.

Thank you for pointing out that the "results" of psychology are only local, and that therefore psychology is not a science.

You suspect too much. The adjustment is based on the false assumption that there is a "true score", a score which the personality test estimates with error.

Obviously the post also ignores that scores on personality tests are not intrinsic propreties of individuals but extrinsic properties. For example, Chinese in Taiwan score low on conscientiousness and high on neuroticism. It also ignore that although personality factors are heritable at the level of populations the GED takers may be un-conscientious for reasons unrelated to their genes.

The post also confuses a score on a personality test factor termed conscientiousness with persistence and motivation.

Man Who Knows what is needed said...

Wow, those pensions sure sound cushy. I bet you're ready to drop whatever you're doing--because it's tough and underpaid--and go right on over and get a job teaching in the NYC public schools if you think it's such a great deal. Let me know how that goes.